Foreign automakers switch to trading as Vietnamese scale up production

While foreign-invested manufacturers have shifted to importing cars for domestic sale, Vietnamese enterprises have increased investments and expanded production, vowing to develop a domestic automobile industry. 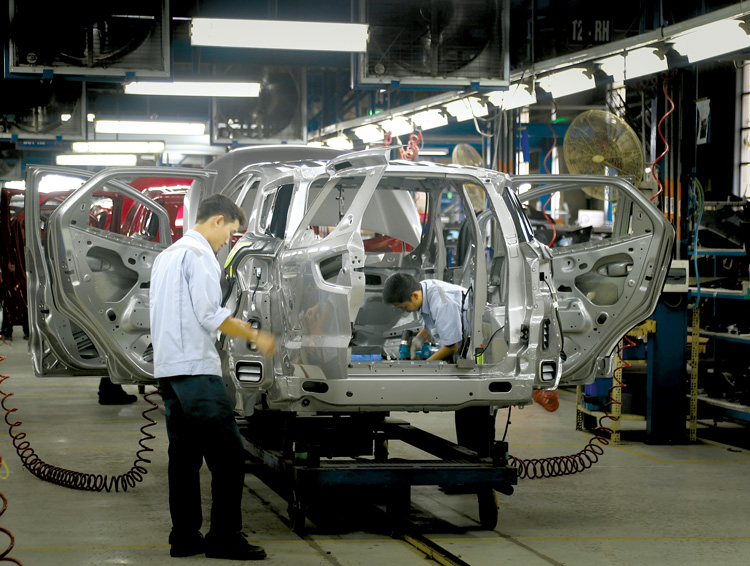 Truong Hai Automobile (Thaco) on March 25 opened Thaco Mazda, which is considered Mazda’s biggest and most modern factory in South East Asia, with total area of 30.3 hectares and capacity of 100,000 products a year.

The cargo carried by APL included Mazda car parts and machines that serve the manufacturing and assembling of cars at Thaco Mazda and the Chu Lai – Truong Hai Automobile Mechanical Engineering Industrial Zone.

Prior to that, in 2017, Thaco put Bus Thaco, the biggest bus manufacturing factory in ASEAN with the capacity of 20,000 products a year, into operation. The enterprise also spent money to upgrade car parts and accessory manufacturing factories which provide components to assemblers.

The automobile manufacturer made the commitment to Quang Nam provincial leaders.

In its plan to export cars to regional markets, Hyundai Thanh Cong is considering opening a second factory in Vietnam.

The existing factory, in Ninh Binh province, now has capacity of 60,000 products a year. It makes Hyundai SantaFe, Elantra, Grand I, Tucson and New Porter 150 models.

Anticipating the new tendencies in the 4.0 era, Thaco many years ago decided that it needs to develop the Chu Lai – Truong Hai Automobile IZ into a modern multi-purpose mechanical engineering and automobile production center.

The newly inaugurated Thaco Mazda is equipped with the most advanced automatic production lines. These include a robotic welding line with laser technology and an 80 percent automatic assembling line.

According to Thaco, the group now has 20 car part manufacturing and assembling factories using 4.0 technologies.

VinFast, another Vietnamese automobile brand, also is thinking big with its plan to become the leading automobile manufacturer in South East Asia with the capacity of 500,000 products by 2025.

To reach that goal, Vinfast has signed a contract with Siemens on building a modern digital factory similar to the factories of world famous manufacturers like Mercedes, BMW, Maserati and Volkswagen.

Vinfast plans to launch two models this year, one sedan and one SUV.

Could tungsten mines be the springboard for Vietnam’s auto industry?