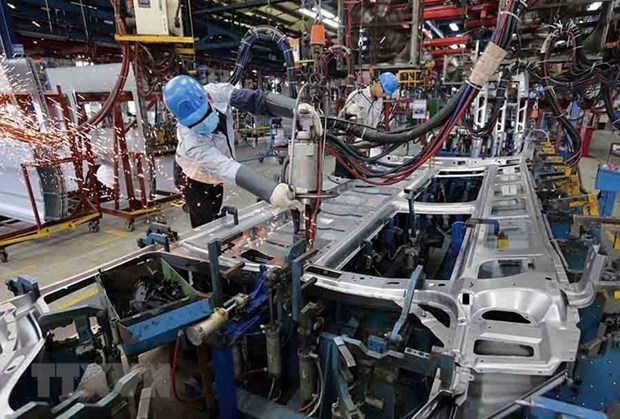 Talking to the Vietnam News Agency on the sidelines of the ongoing 13th National Party Congress in Hanoi, Hantao from Asia-Pacific Daily (APD) said the process, along with the market economy and open-door policies, has helped lift Vietnam from being isolated to an economy opening to and widely interacting with outside.

Vietnam's achievements are thanks to the leadership of the CPV, and the Party’s right decision to open the country to the world, he stressed.

Sharing this opinion, Stefan Kühner from the German Communist Party’s Unsere Zeit newspaper said what Vietnam has achieved under the leadership of the CPV over the last 35 years have amazed him, especially those in poverty reduction and improvement of the lives of people.

Referring to Vietnam's position in the world, Kühner said Vietnam is actively participating in activities of the UN Security Council to seek peaceful solutions to international issues, and it has demonstrated how important the cohesion of ASEAN member nations is.
Vietnam's increasing prestige and position is closely related to its economic development thanks to the renewal process, he said, adding that the country needs to continue its reform policy and open its door wider in order to reap more success.

According to Dipanjan Roy Chaudhury from the Economic Times of India, Vietnam not only is a growing economy in Indo-Pacific region, but also plays an important role in Southeast Asia.

The Congress once again demonstrates the extremely crucial role of the CPV in maintaining stability of the country, he said, affirming that a strong Vietnam is important for stability in both the Mekong region and the East Sea.

The success in the fight against COVID-19 is one of the greatest achievements of the CPV in 2020, he said.

Meanwhile, Hussain Janjua, an Indian media expert, highlighted Vietnam’s economic development achievement, saying that thanks to tireless efforts, the country lifted its GDP and per capita income to 343 billion USD and 3,521 USD, respectively, in 2020 from 14 billion USD and 250 USD in the first years of its renewal process.

The country successfully performed its role as the ASEAN Chair 2020, Chairman of the ASEAN Inter-Parliamentary Assembly (AIPA 41) and a non-permanent member of the UN Security Council, thus improving its global reputation and position, said the Indian expert.