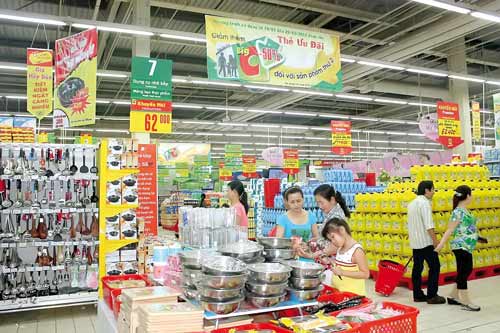 Aeon has announced it would open a new shopping mall in Hanoi on October 28. Just 20-minute of drive far from Hanoi’s center, Aeon Long Bien is believed to be one of the largest shopping complexes in the capital city with the total area of 96,000 square meters.

Yukio Konishi, chair and CEO of Aeon Mall Vietnam, noted that Vietnam was a market with great potential. Aeon’s first shopping mall, opened in January 2014, attracts 13 million visitors every year. This prompted the retailer to open 20 more shopping malls in Hanoi and HCM City in the future.

Having been present in Vietnam since 2008, Lotte Mart, the South Korean leading retailer, now has 10 supermarkets in Vietnam, each of which covers floor area of no less than 10,000 square meters and investment capital of $30-40 million.

As such, the total investment capital Lotte has injected into its retail chain in Vietnam has reached hundreds of millions of dollars. According to Lotte Mart Vietnam’s general director Hong Won Sik, Lotte will operate 60 supermarkets in Vietnam by 2020.

In early March 2015, at a meeting with HCM City’s Mayor Le Hoang Quan, Lotte’s President Shin Dong Bin said the group had bought 70 percent of Diamond Plaza’s stake in district 1, and it plans another big investment project in the time to come.

Eco Smart City, capitalized at $2 billion, will be developed by Lotte in cooperation with Japanese investors Mitsubishi and Toshiba in Thu Thiem new urban area in district 2. The project, once operational, will turn the area into a finance, trade and high-end service center of the city.

Meanwhile, Central Group, a big company from Thailand, opened Robinson supermarket in Hanoi and HCM City with retail premises area of 10,000 square meters for each. The group believes the Vietnamese market is even more promising than Thailand, thanks to its higher population.

Cooperating or taking over existing supermarket chains are the quickest way for foreign retailers to conquer the Vietnamese market.

In late 2014, Aeon announced cooperation with Fivimart in the north and Citimart in the south, contributing 30 percent and 49 percent of capital to the retail chains, respectively. Citimart now runs 30 supermarkets in the south.

After the deal wrapped up, Aeon announced it would open 500 Aeon Citimarts within 10 years and in the immediate time, it would focus on the plan to raise the number of supermarkets to 200 as soon as possible.