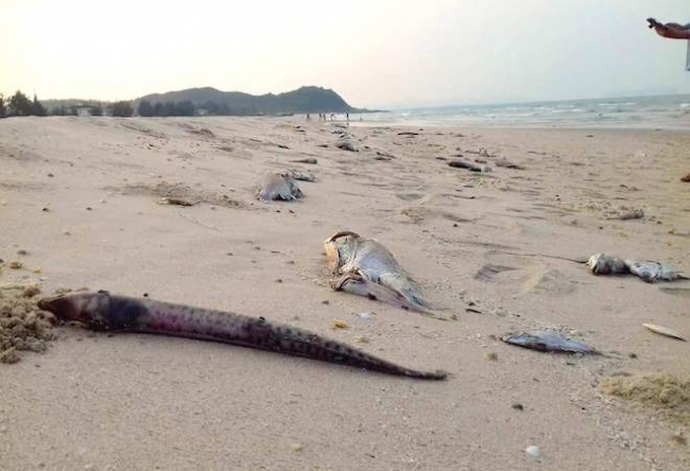 Dead fish have been found in many coastal areas from Vung Ang in Ha Tinh province to the areas in Quang Binh, Quang Tri and Thua Thien-Hue.

Tien Phong quoted a scientist as saying that the fish had died because of cyanide.

Le Thanh Luu, former head of the Aquaculture Research Institute, also said on Nguoi Lao Dong that the fish died because of the sea pollution. He denied that the mass death was caused by seaweed or the earthquakes in Myanmar and Japan.

Local newspapers reported that the dead fish included grouper which only lives in coral and rocky areas, where the ecological environment is very clean.

“The fish will die in masse only when there is a very toxic substance,” Luu said.

Prior to that, Thanh Nien reported that Nguyen Xuan Thanh, a fisherman in Ky Anh Town of Ha Tinh province, when diving in the sea, discovered a pipe that brings discharged water to the sea.

Thanh said the pipe he found had the length of 1.5 kilometers and diameter of 1.1 meters, which originated from the area where Formosa’s investment project is located – the Vung Ang Economic Zone in Ky Anh Town.

“The water from the pipeline looked dark yellow,” he said.

Thanh, after discovering the pipe, reported his discovery to government agencies.

Khau Nhan Kiet, a senior executive of Formosa Ha Tinh, the developer of the project, had a meeting with Tien Phong’s reporters about the pipeline.

Kiet said that the company has a 1-kilometer pipeline which discharges waste water, and the existence of the pipeline is allowed by the Ministry of Natural Resources and the Environment (MONRE).

Regarding the information that Formosa has imported a big volume of chemicals recently, Kiet said this must not be the reason behind the massive fish death.

“It is true that the company has imported chemicals. However, this is not the reason which caused the deaths.  The data provided by the automatic monitoring station can prove this,” Kiet said.

MONRE’s experts said it would be not a simple work to take dead fish samples for testing. He said it was an abnormal phenomenon because the dead fish includes farmed fish in cages and natural fish. Therefore, it would be difficult to find the source in the environment.