VietNamNet Bridge - Of the total 15,523 Vietnamese and foreign prisoners under amnesty this year, four cases committed infringement of national security. 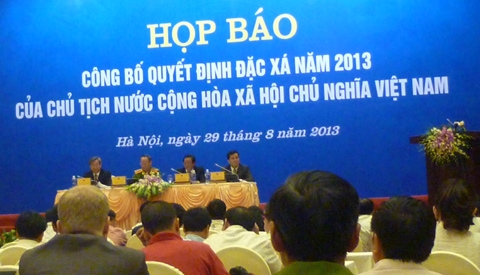 The press conference on amnesty.

The amnesty decision was made public on August 29 by the President's Office, on the occasion of the National Day (September 2). There are a total of 15,446 prisoners will be set free on August 30. Another 77 who are temporarily suspended from serving sentences will also be given amnesty.

Among the pardoned inmates, 1,842 are women, 16 are foreigners, 4 were charged with acting against national security and 3 will receive special amnesty.

Of the 16 foreign prisoners, there are five Chinese, two Taiwanese, four Cambodian, two Malaysian, one American, one Belgian and one Australian.

Addressing a press briefing in Hanoi on August 29, Deputy Head of the Presidential Office, Mr. Giang Son, said the appraisal process is made in a careful, transparent, fair and democratic manner.

Prescribed in Vietnam’s Constitution and institutionalized by the 2007 Law on Amnesty and legal documents, the decision mirrors the Party and State policy of clemency and the humane tradition of the nation, he said.

Son added that prisoners sentenced by all-level People’s Courts that have made good rehabilitation progress, are eligible for a possible pardon, irrespective of their nationalities.