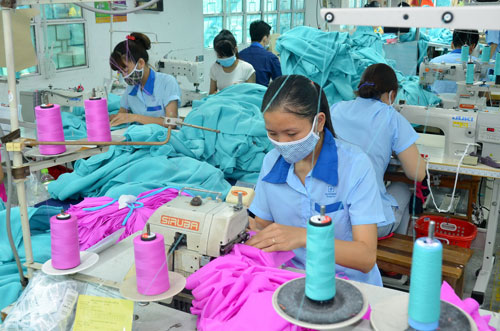 Believed to be the biggest beneficiary from TPP and other free trade agreements (FTAs), Vietnamese garment companies are experiencing tough days as they have to compete with other countries to get orders.

Pham Xuan Hong, chair of the HCMC Textile, Garment, Knitting and Embroidery Association, said the orders for the second quarter of the year have come, but the number is lower than forecasted.

Chair of the Vietnam Textile and Garment Association (Vitas) Vu Duc Giang also said at a meeting with the Prime Minister some days ago that many loyal partners have shifted to place orders with producers from Myanmar and Laos, because the two countries enjoy preferential tariffs when exporting products to the US and EU.

Meanwhile, TPP and the Vietnam-EU FTA which offer preferential tariffs to Vietnam’s exports still have not taken effect.

Vietnam not only has to compete with Myanmar and Laos which are now attracting orders, but also with Cambodia, which outstripped Vietnam in exports to the EU, one of  Vietnam’s largest export markets, in 2015.

According to Vitas, Cambodia now can enjoys zero percent tariff under the GSP program applied to underdeveloped countries, while Vietnam has to bear a tax rate of 9.6 percent.

“The strong rise of Cambodia is worth paying attention to as Cambodia has become the direct rival for Vietnam,” Hong said.

Since the number of orders is modest, Vietnamese garment companies have to compete fiercely with each other to scramble for contracts.

While the input costs have been increasing rapidly due to the higher basic wage, insurance premiums and land rentals, they dare not raise the selling prices.

According to Le Quang Hung, chair of Garmex Sai Gon, Vietnamese products are getting less competitive as Malaysia, Bangladesh and India – the biggest rivals for Vietnam – in 2015 devalued their currencies sharply in order to boost exports.

Meanwhile, the Vietnam dong has lost 5 percent only in value against the dollar.

Garmex Sai Gon, which once put high hopes on TPP, previously set the target of VND1.9 trillion in revenue for 2016, but has decided to lower the targeted figure to VND1.55 trillion.

In 2015, Vietnam exported $27.4 billion worth of textile and garment products. In the first four months of the year, the figure was $8 billion, an increase of 6 percent compared with last year’s same period.