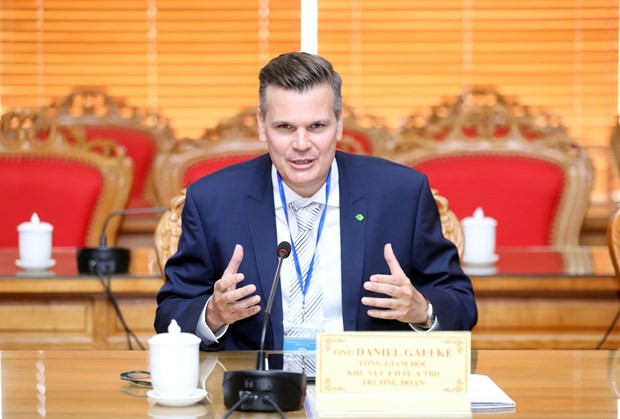 Daniel Gaefke, Director of Projects for the Asia-Pacific region at BayWa r.e., speaks at the working session with Lang Son officials on June 8. (Photo: VNA)

Thieu noted developing renewable and clean energy is a priority of the Vietnamese Government to guarantee national energy security, and Lang Son is working to help carry out this policy, with priority given to wind power.

The province wishes to invite capable and experienced investors in wind power development, he said, adding that some have already explored opportunities and made surveys for 35 projects.

Daniel Gaefke, Director of Projects for the Asia-Pacific region at the Germany-based BayWa r.e., said after nearly two years of surveying, his company is planning to invest in three wind power plants in the districts of Van Quan, Cao Loc and Loc Binh.

With a combined capacity of 240MW, these plants are set to feature 48 wind turbine towers and investment of over 9 trillion VND (388 million USD) in total. They are expected to become operational in 2025, and their annual output will be sufficient to supply about 230,000 households, he said.

Thieu agreed on some proposals from BayWa r.e., the first firm to seek wind power development in Lang Son, noting that the province will submit other proposals beyond its jurisdiction to the Government and central agencies.

He expressed his hope for stronger coordination between the two sides to take the next steps while asking the company to continue joining hands with local authorities to care for local residents./.
Source: VNA