A lot of traditional brick kilns that caused environment pollution have been forced to stop operation. However, lightweight materials still have not been used for construction works.

VietNamNet Bridge – A lot of traditional brick kilns that caused environment pollution have been forced to stop operation. However, lightweight materials still have not been used for construction works. 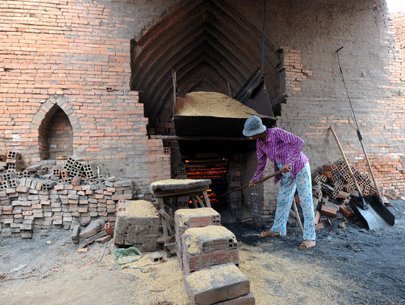 Meanwhile, all the big construction works with nine or more stories, no matter they are state funded or private owned, must use at least 30 percent of new materials from January 15, 2013 to the end of 2015. After 2015, the volume of unburned materials must account for at least 50 percent of the total materials.

However, the regulation has been ignored.

Linh, as a designer, said it is very difficult to persuade investors to use lightweight materials if they still cannot see the benefits to be brought by green materials. In other words, people still don’t have confidence in green materials. The only thing they can see is that they have to pay higher if they use the new materials.

Green materials remain not attractive enough in the eyes of Vietnamese partially because of the limited range of products for their choice. Domestic manufacturers have not made heavy investment enough to make lightweight building materials, while importers have not thought of importing this kind of materials due to the high prices.

According to Linh, the demand in the Vietnamese market is not big enough to encourage manufacturers to set up green material production lines. Meanwhile, the number of workers skilful enough to execute the construction works with lightweight materials remains modest.

“This is really a vicious circle,” Linh commented. “Some analysts said the green material production would only develop when the market gets big enough. Meanwhile, others said only when the products are diversified and good enough, will the demand increase.”

In fact, some kinds of lightweight materials have been used for some construction works. For examples, gypsum walls have been used for offices. However, it is still unclear when green materials are used in a large scale in Vietnam.  Most of the multi-storey buildings now in Vietnam are designed with reinforced concrete because of the high costs of lightweight materials and the lack of qualified construction workers.

The government has approved the national program on unburned material development under which 30-40 percent of burned clay bricks would be replaced by 2020, thus helping reduce the emissions from the traditional brick kilns.

In HCM City, the city authorities have assigned the construction department to draw up a plan on unburned building material development.

In a document to the Ministry of Construction, HCM City authorities said the brick production in traditional kilns has stopped. 305 kilns of 94 production units have stopped operation. Some brick companies have been asked to relocate to the other areas to give place to public works.