As many as 50 per cent of leaders at state departments and agencies in HCM City do not know how to use their work emails, said a local official.

As many as 50 per cent of leaders at state departments and agencies in HCM City do not know how to use their work emails, said a local official. 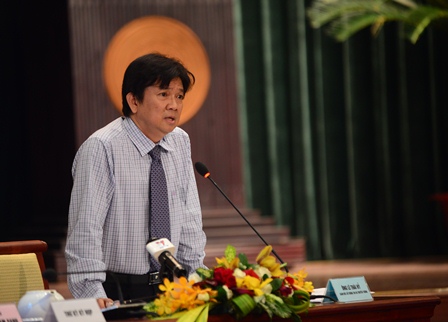 Director of the HCM City's Department of Information and Communications, Le Thai Hy, speaking at the meeting.

Although HCM City is among the largest and arguably the most dynamic city in Vietnam, many municipal officials are not technology literate, according to Le Thai Hy, director of the HCM City's Department of Information and Communications. Hy revealed these statistics this morning, December 12, at the 16th working session of the HCM City People’s Council.

Le Manh Ha, vice chairman of the HCM City People’s Committee, said that the IT skills of many high-level employees of municipal agencies were ranked the lowest in the country. Only one leader at the Department of Culture, Sports and Tourism used email, while none from the Department of Labour, Invalids and Social Affairs had email addresses.

According to Ha, a survey on email use in HCM City showed that their colleagues in the outlying district of Hoc Mon used their emails more often.