The decision was released after the municipal authorities received a document from the Ministry of Natural Resources and the Environment (MONRE) asking to examine land violations related to the farmstay model. 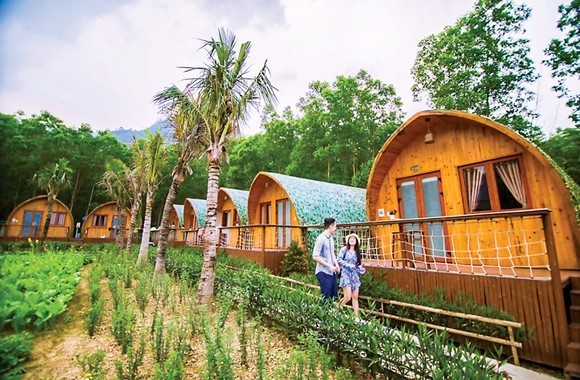 The Government Office in July released a document conveying the Prime Minister’s request to check information in newspapers about the increasing number of farmstays.

Local newspapers reported that farmstays have been developing rapidly, but there is no legal framework to manage the business model. Most farmstays are developed on agricultural and forestry land, or even appropriated land.

Therefore, it is necessary to issue legal documents and policies to control farmstay development and avoid serious consequences to the investment environment.

The Prime Minister requested the Ministries of Culture, Sports and Tourism; MONRE; Agriculture and Rural Development; and Construction to apply management solutions suitable to their functions and competence.

Farmstays began developing in Hanoi in mid-2019. They are defined as a ‘hybrid’ product between a farm and homestay.

Depending on the investment scale, clients get benefits from clean vegetable farming model with modern technology transfer, based on agreements between clients and investors on committed annual profits.

In Ho Tram, Binh Chau in Ba Ria – Vung Tau, under the G7 farmstay project, covering an area of 200 hectares, each 1,000 square meter land plot was sold at VND1.5-1.7 million per square meter. Buyers can build homestays and garden.

They can expect profit of VND50 million a year from the homestay investment program for ecotourism, and get benefits every month from the farm produce grown on the project land.

The seller advertised that buyers would have the right to own and transfer the land to third parties.

The project has a license for use for 50 years. Agreements on cooperation for investment would be signed, under which land would be allocated for 40 years and would be extended after the 40 years.

The HCM City Real Estate Association has given a warning about the rapid development of farmstays, pointing out that in many cases, institutions and individuals use agriculture and forestry land to illegally build tourist accommodation establishments.