Hanoi authorities have discovered nearly 90 cases of illegal transportation of chicken and destroyed more than 35 tons of chicken and frozen chicken and 170,000 eggs in the past three months.

VietNamNet Bridge – Hanoi authorities have discovered nearly 90 cases of illegal transportation of chicken and destroyed more than 35 tons of chicken and frozen chicken and 170,000 eggs in the past three months. 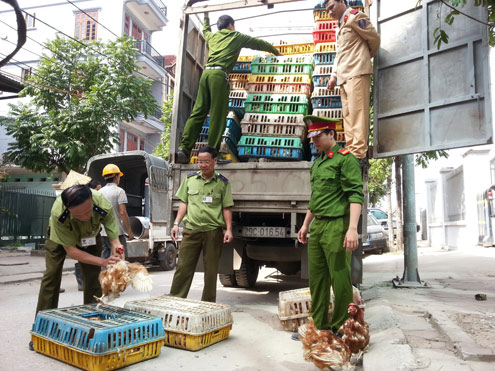 All of the smuggled chicken and chicken organs were transported from China, via the land border.

The competent agencies say that a large proportion of samples of smuggled chicken and chicken organs contain antibiotics and toxic substances. In late February, over 1,000 dead chickens were found in a car. The Veterinary Department took five samples for testing, which revealed antibiotic residues in all the samples. The Department also found 37 of the 80 samples of live poultry in Quang Ninh province being positive for highly pathogenic avian influenza virus.

The authorities say that the smuggling tactics are increasingly sophisticated. Smuggled poultry is now transported by waterway.

In order to control smuggled poultry, Hanoi and four northern provinces have signed an agreement on cooperation to manage the transportation and trade of poultry and poultry products.

At the conference on preventing poultry smuggling into Vietnam held last December, the authorities approved the goals to prevent 70-80 percent of smuggled chicken from entering Vietnam and totally controlling smuggled chicken into Hanoi by the end of March 2013.