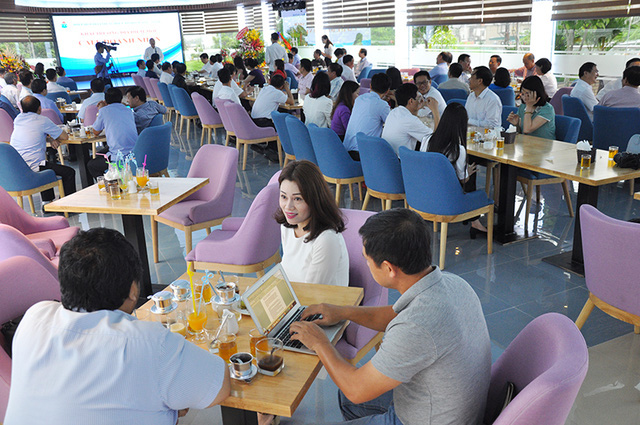 In Dong Thap province, at a corner of the provincial People’s Committee office’s campus, some stone tables and chairs are put together surrounded by ornamental trees which help people feel at ease.

The space with simple decoration is called the ‘businessmen’s café’.

The province’s chair Nguyen Van Duong one day walked from his house to the café when the sky was leaden, signaling rain.

“It is going to rain. Maybe no one will come today,” Duong said, looking at his watch.

However, he still stayed at the café, turned on his tablet, checked his to-do list and read documents.

“I have been reported that you have something to complain,” Duong said to the woman.

“I have received a notice from taxation agency about a fine of VND200 million for delay in tax payment,” Thuy said.

“We are meeting big difficulties with rice exports. If we have to pay the fine, we will suffer heavily,” she said.

“The businesses in agriculture sector can enjoy investment incentives. Have you received incentives?” Duong asked her.

“Not yet,” Thuy replied.

Duong said that the business would not be fined and that taxation officials will come to see Thuy to show the procedures for asking for investment incentives.

Businessmen’s Cafe, where province’s leaders meet business people to hear about complaints and settle problems, has become a brand of Dong Thap. And the model has brought big benefits: the GRDP of the province increased by 50 percent after five years.

As local businesses can have problems solved quickly, they have become more profitable. In the past, the enterprises in the trade and service sector contributed 26.7 percent to the local economy, but its contribution proportion now is equal to that from the agriculture – forestry – aquaculture sector.

Following the successful model, more business cafes have been opened in other provinces and cities.

Besides Quang Ninh, which opened such a café in August, Quang Ngai also has a café, while Thai Nguyen has a ‘businessmen’s tea shop’.

VCCI (Vietnam Chamber of Commerce & Industry) chair Vu Tien Loc commented that the special cafes have helped bring business people and local authorities closer. He believes that the model not only has helped businesses settle difficulties, but has also allowed local authorities to get information that can improve policies.

Businesses have to contend with a “forest” of sublicenses