Hanoi, HCM City look to crack down on coaches, parking on pavements

The illegal parking of coaches on streets in HCM City in order to collect and drop off passengers has been a headache for local authorities, but coach operators insist measures should be taken to create more favourable conditions for them.

The illegal parking of coaches on streets in HCM City in order to collect and drop off passengers has been a headache for local authorities, but coach operators insist measures should be taken to create more favourable conditions for them. 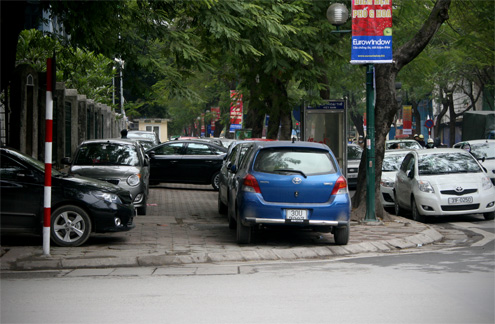 Tran Thuy Hanh, a local resident, told the Tuoi Tre (Youth) newspaper that coaches are encroaching on streets in the inner city, obstructing the view of pedestrians and motorists.

Hoang Van Thai, of District 5's Tran Phu Street, complained that dozens of coaches park on the streets every day, and flocks of waiting tourists turn the street into a chaotic scene. Passengers even throw garbage and urinate on the street.

In February, Secretary of HCM City's Party Committee Dinh La Thang ordered the installation of "no parking" signs for cars with nine seats or more on Nguyen Thai Binh and Le Thi Hong Gam streets in an effort to regulate traffic in the city. However, the coach operators still reportedly commit violations.

In a recent meeting with the city's Department of Transport, Tran Thanh, Director of the Toan Thang transport company, said his company runs coaches on fixed routes from the Mien Tay (Western) and Mien Dong (Eastern) bus stations to the southern province of Ba Ria-Vung Tau. However, if the coach only picks up passengers at the station, there are usually only two to three passengers, but the number of passengers within the city centre is huge - 5,000 to 6,000 passengers per day.

He said the city prohibits coaches from parking and collecting passengers on these streets, but it has not suggested new pick-up areas, causing difficulties for businesses and passengers.

Many residents in the western region want to be transported to hospitals and back home within a day to reduce travelling expenses, Dao Van Nhat, a representative from Hue Nghia Company, said while suggesting pick-up and drop-off stations at hospitals.

Le Trung Tinh, Chairman of the city's Inter-province and Tourism Passenger Transport Association, said the transport department must soon publish legal pick-up spots in the inner city to ensure the rights and benefits of legally-operating businesses.

Nguyen Van Thanh, Chairman of the Viet Nam Automobile Transport Association (VATA), said coaches operating in stations have to bear many fees and taxes while the management of enterprises under official contracts remains loose.

Le Dinh Tho, Deputy Minister of Transport, said on Monday that the ministry would stiffen requirements on issuing business licenses for coaches under contract, in addition to allowing these coaches to pick up passengers at designated areas only.

He urged localities to designate pick-up and drop-off spots for fixed route coaches in densely-populated places. He also asked transport businesses operating on fixed routes to launch buses to carry passengers from pick-up points to stations and vice versa.

Pavements in the capital city continue to be used in illegal ways despite serious opposition, causing traffic jams and creating safety hazards for pedestrians.

These pavements on busy streets are meant to cater to pedestrians but have been turned into business centres instead. It is common to see stores encroach on the pavement or for it to be filled with mobile street vendors, particularly in business areas in Hoan Kiem, Hai Ba Trung and Ba Dinh districts.

The practice is also rampant on streets in the Old Quarter, such as Hang Dao, Hang Ma and Dinh Liet in Hoan Kiem, where the entire pavement is used to display clothes, footwear, wallets and cosmetics or to park their vehicles.

On these streets, promotional signs also make their way onto the road, and shoppers feel free to stop their vehicles in the middle of the road to negotiate prices.

On other streets, restaurants and tea shops turn the pavements into gathering places for people from all walks of life.

Government Decree 100 mandates that those streets which are permitted to use part of the pavement as a parking lot must leave a 1.5m-wide section of that pavement open to pedestrians. However, on many streets, the whole pavement is used as a parking lot.

The pedestrians, who legally have right of way, have no choice but to walk on the street, increasing the risk of traffic accidents.

A police report revealed that 122 traffic fatalities in 2015 were the result of pedestrians walking on the road.

Nguyen Thu Thuy, a resident in Hoan Kiem District, said, "We are forced to walk on the road, as the pavements on many streets are fully occupied, and this is very risky, particularly for the elderly and the children.

"On some streets, where pavements are occupied by restaurants or tea shops, customers often sit down to drink and talk until midnight, affecting nearby residents. After they leave, the pavements are filled with rubbish," she said.

Thuy added that the practice had also led to traffic congestion on these streets as it hindered traffic movement, particularly during peak hours.

Although local authorities have spared no effort in handling the situation, not much has changed.

Most of the district governments said they regularly inspected the roads and punished violators but violations continued to occur.

Head of Police of Phan Chu Trinh Ward in Hoan Kiem District Nguyen Tien Nong told the Tien Phong (Vanguard) newspaper that the local police was actively working with the authorised agencies to crack down on the illegal use of pavements, but many people kept violating the law because of the lure of huge profits.

Ineffective administrative penalties were also blamed for the situation. Under the current regulations, the heaviest fine for occupying roads and pavements is VND25 million (US$1,130).

Chairman of the municipal People's Committee Nguyen Duc Chung on Tuesday requested the authorised agencies to step up inspections to ensure the compliance with vehicle parking regulations and to completely stamp out illegal parking lots.