A German passenger on Vietnam Airlines’ flight VN36,  which landed at the Noi Bai International Airport in the morning of January 1, was the first foreign visitor to set foot in Hanoi in 2017.

A German passenger on Vietnam Airlines’ flight VN36,  which landed at the Noi Bai International Airport in the morning of January 1, was the first foreign visitor to set foot in Hanoi in 2017. 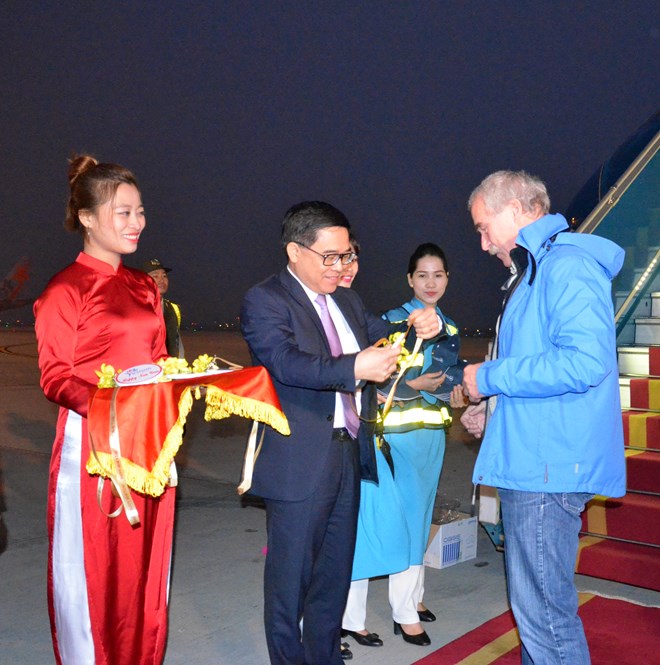 Director of Hanoi Department of Tourism Do Dinh Hong greets the first foreign visitor of Hanoi.

Thomas Bauche and his wife were greeted with musical performance and gifts presented by representatives of local agencies.

The German couple said this is the second time they have travelled to Vietnam. Besides Hanoi, they planned to go to Hoi An, Ho Chi Minh City and the southwest region.

Bauche said last year he and his wife stayed in Vietnam for three weeks, adding that he really loves Vietnamese cuisine.

Do Dinh Hong, Director of Hanoi Department of Tourism said that in 2017, the city will focus on promoting cultural products, local festivals, trade villages, MICE tours and sports tourism.

Hanoi has been chosen among top 10 destinations of Asia by several leading travel magazines. In 2016, the city welcomed about four million international visitors. 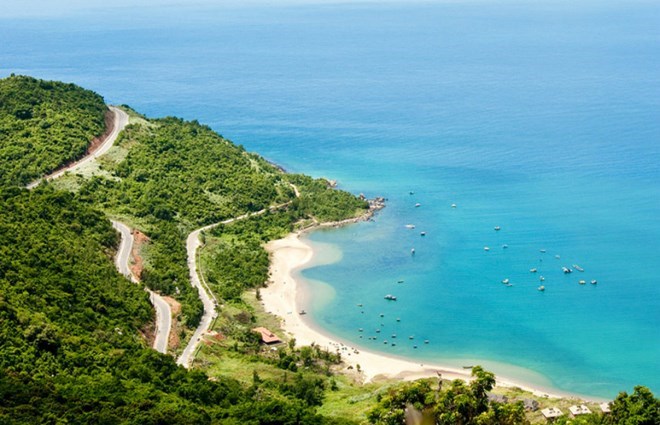 A corner of Son Tra peninsula

Singapore’s Silk Air carried more than 160 passengers from the island state to the central coastal city of Da Nang on the first day of the New Year (January 1).

A representative from the municipal Department of Tourism presented flowers to the two first visitors, Ross Parker and his wife Corrine from Australia.

On the day, Da Nang also welcomed passengers from the Republic of Korea on the Incheon-Da Nang flight operated by Jin Air and T’way Air.

Da Nang was named among top 10 holiday destinations in Asia in 2013 and 2014 by Smart Travel Asia magazine, top 10 destinations on the rise in 2015 by the Trip Advisor website.

Last year, the city was honoured as Asia’s leading festival and event destination by the World Travel Awards.

The Da Nang airport is now operating 20 international routes, including 11 direct and 9 charter ones.

The same day, authorities of Hoi An city, a World Heritage site in the central province of Quang Nam, also greeted the first foreign visitors of the year with flowers and souvenirs. 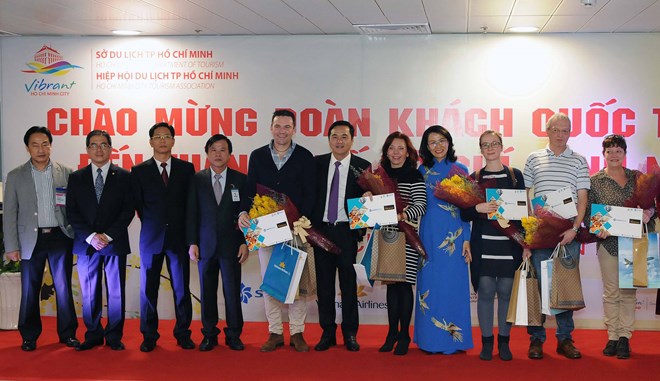 The first foreign visitors of HCM City in 2017.

The southern economic hub of Ho Chi Minh City received the first international tourists of the year 2017 at the Tan Son Nhat International Airport on January 1.

Passengers on flight VN30 from Germany and flight TG550 from the UK’s London were greeted with a ceremony jointly held by the City’s Department of Tourism and Tourism Association. They were treated with musical performance and invited to try their hand at Vietnam’s traditional art such as calligraphy.

Nguyen Thi Thu, Vice Chairwoman of HCM City People’s Committee said that the city has improved infrastructure to meet the demands of visitors. In 2017, HCM City aims to develop more travel products based on its advantages such as MICE tours and cuisine tourism.

The city’s tourism sector has set goals of serving 5.5 million foreign visitors in 2017, a rise of 10 percent compared to last year, and earning total revenue of 112 trillion VND (around 4.9 billion USD), an increase of 8 percent year-on-year. HCM City also strives to turn tourism into one of its key industries.

Sa Pa town in the northern province of Lao Cai welcomed about 35,000 visitors in the three-day calendar New Year holiday, a slight rise over the same time in 2016.

According to Vice Chairman of the Sa Pa district People’s Committee Nguyen Ngoc Hinh, the visitors, mostly from southern and central regions, enjoyed the romantic space of the “cloudy town”, with a temperature of around 7 degrees Celsius.

To deal with the overload in accommodation, this year, Sa Pa has developed homestay tourism, which allows tourists to experience daily activities of locals and explore their culture and customs, he said.

He said that the district has also focused on expanding eco-tourism tours to a number of areas, including Thanh Phu, Nam Sai and Thanh Kim which are home to many ethnic minority groups.

In the first days of 2017, the locality also held a number of cultural and art events to attract visitors, while deploying forces to ensure traffic safety and security, Hinh added.

Located at 1,600 metres above the sea level in Vietnam’s northwest mountains, Sa Pa is a picturesque town famous for its fine, rugged scenery and the cultural diversity of many ethnic minority groups.

Home to many hill tribes, rice terraces, lush vegetation and Fansipan, which is dubbed as the roof of Indochina, Sa Pa has become an ideal destination for domestic and foreign travellers.

The central province of Thua Thien-Hue welcomed 190 foreign visitors aboard a Vietnam Airlines’ flight from Hanoi on January 1.

Two UK nationals, Andrew Frost and Chung Mei See, were the lucky tourists greeted by leaders of the provincial tourism sector at the Phu Bai International Airport and presented with a night at five-star La Residence Hotel.

Nguyen Van Phuc, Vice Director of the provincial Culture, Sports and Tourism Department Nguyen Van Phuc said that although the province was hard hit by the environmental incident caused by Formosa, it still enjoyed a rise in the number of visitors in 2016.

The local tourism sector targets 3.7 million visitors with half of them foreigners in 2017, a year-on-year increase of 12 percent. It expects to earn 3.8 trillion VND (166.8 million USD) from tourism, up 15 percent against last year.

26,000 tourists, mostly foreigners, have visited Ha Long Bay over the past 2 days, up 50% against last year. All local cruise ships have been inspected to ensure safety.

ha long bay welcomes 26,000 visitors on new year holiday hinh 0 A visitor from the Republic of Korea (RoK) highlighted the natural beauty of Ha Long Bay, saying he will introduce the bay to his friends after the trip.