Hanoi residents complain about smoke from burning of garbage, straw 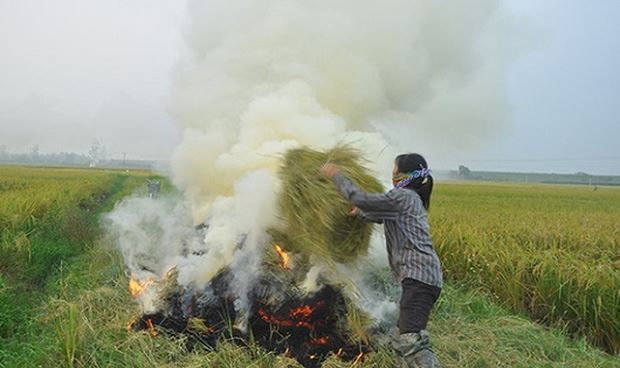 However, in the Tho Xuan commune of Dan Phuong district in Hanoi, ‘rice field with no straw burning’ is the norm. Farmers there are instructed to compost organic fertilizer with bioproducts.

But for many locals, burning straw is more convenient.

Le Thi Bich, a farmer said people have to burn straw because the demand for straw is no longer high. In the past, straw was used to make brooms or used as fuel, but now farmers cook with gas ovens.

“Straw is tough and difficult to disintegrate. So farmers have to burn right on the field. If not, straw will pollute water sources and canals,” Bich said.

Khien, another farmer, said she burns straw to get ash to use as fertilizer for her vegetable fields. “If we don’t have ashes, we will have to buy chemical fertilizers, which is harmful to human health.”

The pollution caused by the burning of garbage, straw and agriculture by-products is a big problem that Hanoi and Red River Delta provinces are facing.


Scientists warned that burning not only causes immediate consequences such as smoke and increases temperatures, but also affects human’s health in the long term.

Nguyen Thi Anh Tuyet from the Hanoi University of Science & Technology said the burning of materials in the open air (open burning) when cooking (with honeycomb coal stoves), or the burning of biomass (paper, wood, by-products) and forest fires will produce toxic pollutants due to low temperature burning (200-700oC) and insufficient time to combust completely.

Tuyet said experiments show that the dust and metal generated during the combustion process causes cancer to animals, including lung, stomach and skin cancer.

Research works found that children and women living in the areas with open burning activities face a higher risk of exposure to toxins than other subjects.

Nguyen Trung Thuan from the Pollution Control Agency has also warned that the open burning could be the reason for the establishment of dioxin residue contamination areas, i.e. areas influenced by the long-term emissions from metallurgy, incinerators and open burning activities.

Tuyet stressed that the restriction of open burning will play an important role in improving the environment and the health of the community.

WTE technology: a good solution to generate electricity from waste