The government of Hanoi City has plans to build two more metro lines in the west of the city to cope with traffic congestion there.

The government of Hanoi City has plans to build two more metro lines in the west of the city to cope with traffic congestion there. 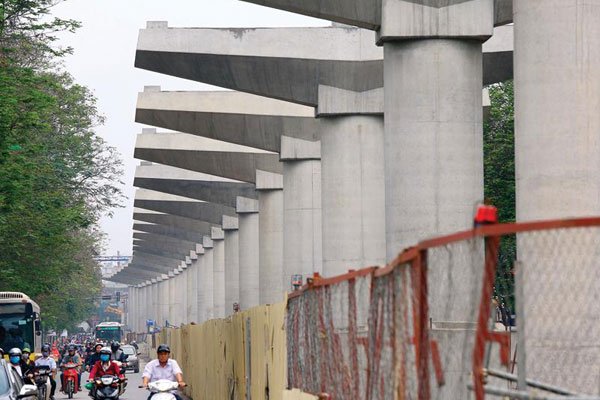 Nhon-Hanoi Station metro line is under construction in Hanoi. The government of Hanoi City has plans to build two more metro lines

A 13.05-kilometer metro line connecting Cat Linh and Ha Dong has been underway for seven years. The VND18-trillion project is scheduled for completion at the end of this year.

A second line, which is 12.5 kilometers long and links Nhon and Hanoi Station, got off the ground in 2010, and was originally expected to be up and running next year.

However, the project is just half-complete as the Chinese contractor has been slow in payments for sub-contractors. Meanwhile, traffic congestion in the western gateway of the city is worsening.

Worse still, the project is facing cost overruns, with its capital adjusted up to nearly VND33 trillion from the original VND22 trillion. Its inauguration has been rescheduled to 2021.

Meanwhile, a 24-kilometer elevated railway linking Ngoc Hoi and Yen Vien has remained on paper even though it was originally planned to begin construction in 2007.

Therefore, the Hanoi government has proposed the Government and relevant ministries allow it to develop two more metro lines.

When the Cat Linh-Ha Dong line is in place, Hanoi will build an urban rail line from Tran Hung Dao Street in Hoan Kiem District to Thuong Dinh Street in Thanh Xuan.

The line would be developed into stages, with the first section stretching 11.5 kilometers between Nam Thang Long and Tran Hung Dao and costing an estimated VND19.55 trillion, which would be sourced from the Japan International Cooperation Agency.

Prime Minister Nguyen Xuan Phuc gave the city the green light to build this section in the first quarter of this year.

And work on it can start in the third quarter of next year and be finished in 2024.

The Hanoi’s People Committee has proposed taking out an official development assistance (ODA) loan of US$1.075 billion from the Asian Development Bank to finance the US$1.225 billion project.

The remainder would be Vietnam’s reciprocal capital. The project would be carried out from 2020 to 2025.