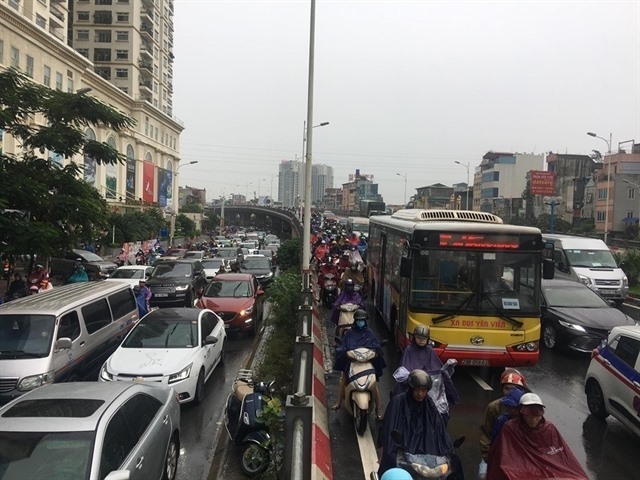 The plan was discussed at a Friday conference hosted by Hà Nội Department of Transport on zoning to limit motorbikes and improve public transport.

Phạm Anh Tuấn, representative of the Transport Development and Strategy Institute (TDSI) under the Ministry of Transport, said from 2011 to 2018, the number of motorbikes increased by 6.7 per cent.

“With the same number of carried passengers, the street area occupied by motorbikes is 6.8 times higher than buses,” said Tuấn.

The institute offered options to limit motorbikes on the capital's roads based on districts and traffic beltways.

Some 4.74 million people, 52 per cent of the city’s population, are expected to be impacted.

The option has some shortcomings including difficulties in organising traffic flow, building parking lots and transit stations.

The second option based on beltways has been implemented in Singapore, London and China’s Guangzhou, according to TDSI.

Among five beltway roads of Hà Nội that will be constructed by 2030, beltway road No.3 meets all standards to apply a motorbike ban.

“This is a closed belt with wide cross section eight to ten lanes. Some sections are urban highways which can divide traffic flow," said Tuấn.

It is possible to build parking lots, transit stations and other supporting services near the road, he added.

TDSI recommended Hà Nội ban motorbikes only when the public transport system can satisfy at least 60.5 per cent of travel demand.

Some have proposed a motorbike restriction by hours on certain days and streets. Hà Nội could also ban motorbikes by expanding pedestrian areas.

In other areas, motorbikes could only be restricted from 6am to 10pm and replaced by public transport.

“In 16 years, city authorities raised awareness of people about the policy, restricted new motorbike registration, banned motorbikes on some streets, stopped out-of-town motorbikes from entering the city and eventually completely prohibited all motorbikes and destroyed old ones,” said Vinh.

“The public transport system needs improving to serve 80 per cent of the city’s population by 2030 with a transit station 500m away from a residential area,” he said. — VNS

The annual traffic-related death toll in Vietnam has risen to almost 10,000 on average over the past decade, with most of the deceased being of working age, according to data from the Ministry of Public Security.