Hanoi T&T made a big bang just one week before the V.League's opening when they separated from head coach Phan Thanh Hung.

Ha Noi T&T made a big bang just one week before the V.League's opening when they separated from head coach Phan Thanh Hung. 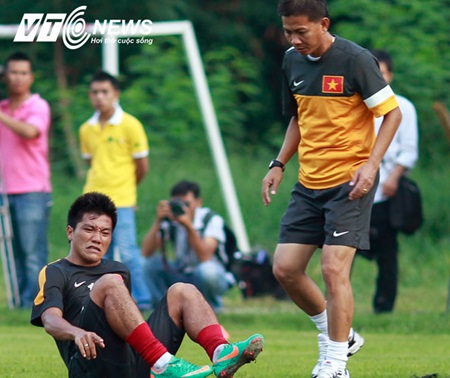 Coach Pham Minh Duc is appointed head coach of Ha Noi T&T just one week before the begin of the V.League 2016. — Photo vietdaily.com

Hung, who had been working with the capital team for six years, announced his leave on Saturday, giving his position over to youth team manager Pham Minh Duc, who is still shocked over the sudden appointment.

"Hung has asked for his rest several times, and last month he wanted to stop coaching for family reasons. We have persuaded him a lot, but could not make him change his mind," said Ha Noi T&T President Nguyen Quoc Hoi.

"We will let him rest, and want him to become our technical director when he comes back," Hoi added.

He also led the team to the second position in the remaining seasons.

"I left Da Nang behind to arrive at Ha Noi in 2009. More than six years here means that I have had little time with my family. I knew that being a football coach, I would have to accept this reality. But I could not leave my home for longer. It is the main reason for my quitting," Hung said.

"It is the right moment, as I have prepared the team in all fields before the V.League begins, especially the younger generation, they are ready for a tough tournament.

"The club managers have also found a good coach to replace me. Duc is coach of the U21s. He has experience in coaching young players, and some of our first team players were brought up from his squad. I think there will be no obstacles for him," Hung, age 55, said.

Many players were also surprised with the news.

National midfielder Pham Thanh Luong said he did not believe it until the team mangers confirmed the news during a meeting.

"It is surprising. I felt sad, because in six years here he left impressive marks, he helped us a lot in our success, always being in the top two," Luong said.

U23 midfielder Dao Duy Khanh also shared his opinion, saying ‘thank you' to Hung, who he considered to be another father in his career.

"I am surprised, very surprised, because I never thought about this position. I have even made plans for my young team in 2016. Now I am taking charge of the first team, just a week before the V.League's opening," said Duc.

"I would be considered a coward if I refused. I accept this duty and will try my best. V.League is always harsh and there are many unexpected things happening. The pressure will be heavy, and it is even heavier because I am replacing such a good coach like Hung," he added.

"But I have my own advantages, because I had nine years competing in the V.League and many players were under my reign with the young teams. I have learned from my predecessors and colleagues to ensure my job."

Ha Noi T&T started training for the coming tournament on February 13. They will be visitors in the first round match against FLC Thanh Hoa on Sunday.

After a change in head coach, Ha Noi T&T also said good-bye to one of their great players when goalkeeper Duong Hong Son decided to retire.

The former national member announced his decision just one day after his coach, although he still has one year in his contract with the club.

The 35-year-old will become a goalkeeper coach for the team's U19 squad.

After completing his leave, Tran Anh Duc will take the No 1 jersey to guard the first team's net.