VietNamNet Bridge - To participate in these unique tours, the simple criteria are you must love traveling, love nature and love ... jogging.

VietNamNet Bridge - To participate in these unique tours, the simple criteria are you must love traveling, love nature and love ... jogging. 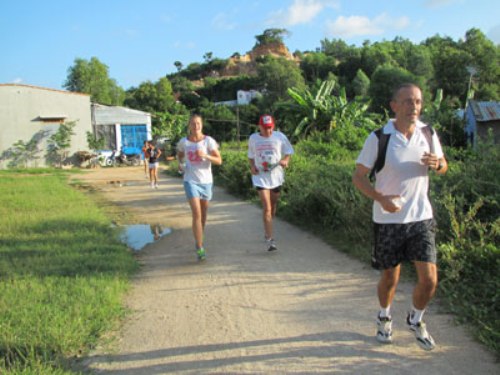 Members of H3 on the road. Photo: nhatrang-travel.

The Hash House Harriers (abbreviated to HHH, H3, or referred to simply as hashing) is an international group of non-competitive running social clubs. An event organized by a club is known as a hash or hash run, with participants calling themselves hashers or hares and hounds.

Hashing originated in December 1938 in Selayang Quarry, Selangor, then in the Federated Malay States (now Malaysia), when a group of British colonial officers and expatriates began meeting on Monday evenings to run, in a fashion patterned after the traditional British paper chase or "hare and hounds," to rid themselves of the excesses of the previous weekend.

At present, there are almost two thousand chapters in all parts of the world, with members distributing newsletters, directories, and magazines and organizing regional and world Hashing events.

In Vietnam, H3 first appeared in Hanoi in 1991 and then spread to other provinces like Vung Tau, Can Tho, Da Nang and Lam Dong. In 2013, harshing came to Nha Trang city (Khanh Hoa province) and has created a unique movement: Ecotourism combined with sports.

The initial objectives of the Hash House Harriers as recorded on the club registration card dated 1950 are: To promote physical fitness; To get rid of weekend hangovers; To acquire a good thirst and to satisfy it in beer; To persuade the older members that they are not as old as they feel.

In Vietnam, H3 was established to relieve members from work and life pressure and to meet people. Joining this organization, foreigners have a chance to discover Vietnam’s culture and beauty and strengthen their health, preparing energy for the next working week. In Nha Trang, H3 also directs to the charitable activities.

The participants are not only foreigners but also Vietnamese people of all ages. They are people who have busy lives and they group up after work to exchange in order to relieve stress of life and share common interests in adventure tourism and sports. 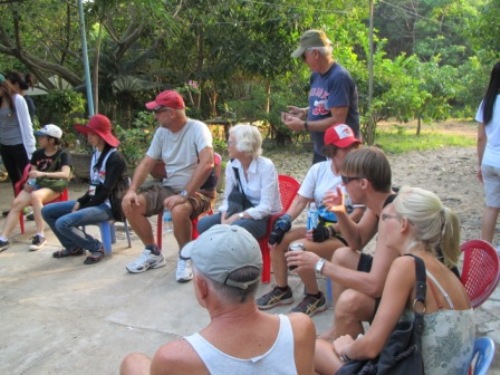 Joining H3, each harsher has a nickname and they do not call each other by their real names. The selected nicknames are weird, funny, reflecting the personality of each member. They talk, exchange and have fun with each other on an equal basis, regardless of ranking, skin color or religion.

A special feature of H3 tours is that hashers do not know in advance the destination, except for the leaders. The selected destination must be close to nature, peaceful and fresh. The surprise of the landscape is one interesting point for hashers.

In each trip, when the cars arrive at the secret destination, H3 members will have to follow the rules "run and play." If seeing a white pinch of white powder, the leader would shout "On On" means to go forward. If seeing the “X”, they would shout "Go back." So the last runner will become the leading runner. They will run continuously until they see the words "Stop beer." That’s the time for stop to drink beer and play fun games.

In H3, members are encouraged to express their personality, their favorite moments of improvisation and laughing.

At a cost of VND50,000 for Vietnamese and VND100,000 for foreigners for each Sunday, you can experience a special tour in Nha Trang.