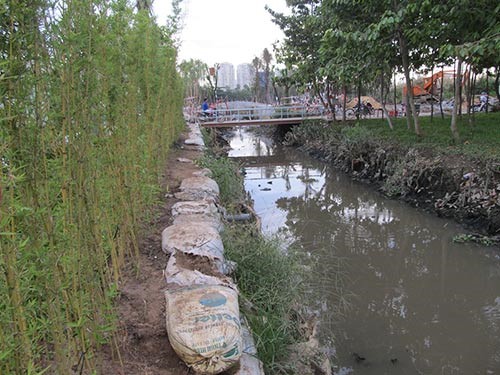 A report of the HCM City Urban Water Drainage Company showed that most of the 5,075 kilometers of canals and ditches used for water drainage have seen the currents getting stuck because of sediment, which has caused floods.

Only 1.6 percent of the total length of the canals and ditches has been dredged to put the current through because of the limited budget.

However, the natural sediment is less dangerous than human activities.

The water drainage company has found that 54 out of 110 canals put under its control have been encroached upon by people. As a result, the canals’ currents are stuck and the water drainage capacity has been seriously affected.

The areas of Le Duc Tho, Le Van Tho, Cay Tram and Pham Van Chieu streets, for example, often suffer from floods because the Cau Cut Canal in Go Vap district, the major water drainage route for the areas, has nearly filled up.

Local people said that the canal bed was very large in the past, while the water was so clean that they could have a bath in it. However, as people have encroached on the canal and built houses on it, the canal has turned into a dead canal with black water.

The Dua Canal in district 2, a branch of the Sai Gon River, which serves water drainage for many areas, is also in the same situation.

In 2008, the HCM City Transport Department released a document about the protection of the water drainage system in the city, showing that 900 canals and ditches must not be encroached on, including Dua Canal.

However, the document could not save it.

According to Chu Thi Trong, a local woman, Dua canal was very long in the past, which started from the Sai Gon River to Ngo Quang Huy street. But the canal was gradually shortened as more residential quarters arose.

The Tan Binh Construction & Investment JSC, when developing a housing project, also filled up a section of the canal and replaced it with a sewer.

Most recently, Tran Thanh, a real estate developer, asked for the local authorities’ permission to fill up another section to make room for another housing project.

Vo Kim Cuong, an architect, pointed out that sewers can only serve the water drainage, while they cannot have many functions like natural canals.

Therefore, he does not think that replacing canals with sewers is a good solution which can be used in all cases.