HCM City has outlined plans for an overhaul of public transport, including metro lines, a new Bus Rapid Transit system and possible bus lanes as well as trams in an aim to reduce traffic congestion.

HCM City has outlined plans for an overhaul of public transport, including metro lines, a new Bus Rapid Transit system and possible bus lanes as well as trams in an aim to reduce traffic congestion. 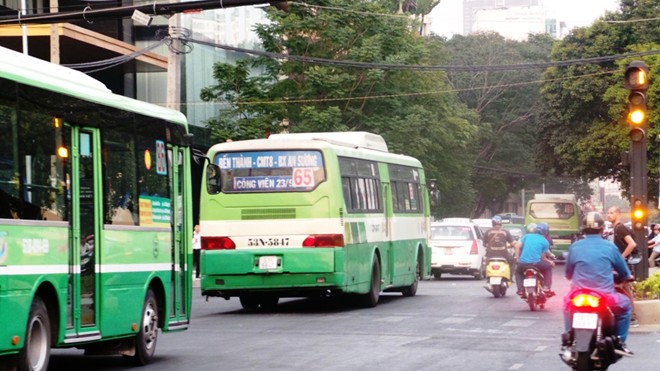 "In addition, there are no street lanes used only for buses and the number of motorbikes on street is large. As a result, buses form long queues on the streets in rush hour and cause traffic jams," he said.

The number of bus passengers has declined dramatically. It is estimated to reach nearly 367.7 million this year compared to 411 million last year, according to the city's Department of Transport.

Traffic congestion and buses not running on schedule are the major causes of the decline in the number of bus passengers.

Le Trung Tinh, former director of the city's Public Transport Management and Operation Centre, said the city should increase the number of bus ticket-sales agents from 30 to hundreds of agents. On some routes with fewer passengers, buses should be replaced with smaller vehicles.

The city should have preferential policies for buses, he said.

Phung Dang Hai, general director of the HCM City Bus Co-operative Alliance, which has many buses on routes from the city centre to Thu Duc University Village, said buses with empty seats on certain days were usually a sign that students were taking exams.

"Because the buses are often late, students would rather drive a motorbike to the university on exam days to ensure they arrive on time," he said.

He said the city should develop a bus route system with clear lanes so buses can operate more effectively.

Le Hoang Minh, deputy director of the city's Department of Transport, said more than 50 per cent of streets in the city were less than even metres wide.

The department plans to conduct research on the viability of using some lanes for buses only, he said.

The city has improved bus service quality, including ensuring that buses are "friendly and safe" and offering electronic bus tickets.

In October, buses considered friendly and safe began operation on 10 routes. The model is expected to be implemented on all bus routes next year.

A programme to reduce traffic congestion, set up by the city's 10th Party Congress for the 2015-20 period, will focus on developing public transport and giving investment priority to public transport that can carry a large number of passengers, such as urban trains and a bus rapid transit (BRT) system.

The investment cost for the BRT is about 5 -10 per cent of the total cost of the metro. As the BRT construction period is short, the plan is highly feasible, according to Mai.

Hoang Nhu Cuong, deputy head of the city's Urban Railway Management Board, said the urban railway should be connected with other public transport like buses and vehicles.

Buses could collect passengers who would travel on metro lines, he said.

"The city needs to subsidise or exempt bus tickets for passengers who use buses to go to metro stations," he said.

The two lines will transport a total of about 50 million of passengers a year, according to the city's Department of Transport.

Under the city's public transport development plan to 2020, the city is expected to have eight metro lines, three tramway or monorail routes, six BRT routes and five elevated roads with a total length of 70.7 km.