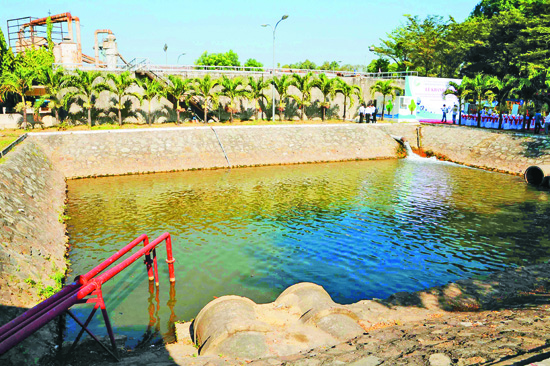 HCMC was once named one of 10 cities in the world which had the most polluted air. Dust, noise, the emission from industrial production activities and transport means all polluted the city.

Environment experts said since 2010, the city cannot give exact forecasts about the exhaust emission quality because the automatic air monitoring system doesn’t work.

Scientists have to measure air pollution manually or semi-automatically in some places in the city and at certain times, which cannot give reliable results.

However, 40.5 percent of the figures about dust and 92.5 percent about noise measured in 10 places in the city are higher than the permitted levels.

The concentrations of pollutants measured at the An Suong intersection and Go Vap area are the highest among the 15 surveyed places.

A report of the city’s Department of Natural Resources and the Environment showed that 60-70 percent of the canal system with the length of 76 kilometers has become polluted.

The water of the Sai Gon River, which is the major source of water supply for the city’s residents, also cannot meet the standards for running water.

The enterprises in industrial zones and export processing zones alone every day produce 32 tons of dust, 487 tons of SO2 and 27 tons of NO2.

Meanwhile, 55 percent of enterprises located in districts have been found as having no standard exhaust treatment systems.

The waste, if not controlled, will be very dangerous to humans and can create acid rain. It is estimated that 24,000 cubic meters of medical waste water a day, plus industrial waste water are discharged to the city’s rivers and canals.

A report showed that the expenditure on environmental activities has been increasing recently, estimated at VND21 trillion a year.

The money has been mostly spent on technical infrastructure system which serves the operations of controlling air and water quality.