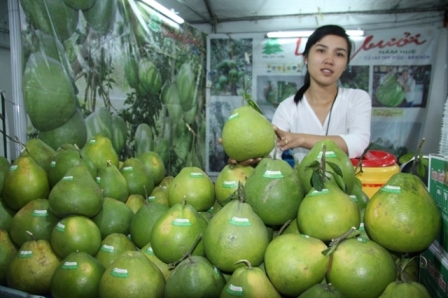 Hugo plans to export longan and dragon fruits to the US. He has been told that he would have to pay $3.4-3.6 to ship a kilo of fruits by air.

The current shipping fee is lower than last year, at $4.5-4.8 per kilo. However, it remains a big problem.

“The air transport cost alone costs 50 percent of the selling price,” he complained.

He said it cost $2.95 to carry a kilo of litchis from Vietnam to Australia by air, which accounted for 42.2 percent of the selling price.

A report by the Ministry of Industry and Trade (MOIT) showed that Vietnam’s fruit export turnover has been increasing steadily in the past few years from $827 million in 2012 to $1 billion in 2013 and $1.477 billion in 2014.

Encouraged by the satisfactory growth rate, MOIT hopes the export turnover would be $2 billion this year. However, the goal is challenging.

A lot of countries have opened their markets to Vietnamese fresh fruits. However, high transport fees have made Vietnamese fruits less competitive in price in comparison with other exporters.

A representative of Laba Da Lat, a banana exporter, noted that Vietnamese farmers have to look for markets and they do not receive any support from the State. Eighty percent of banana output is exported to China, but farmers cannot control the prices.

In 1995, a British investor set up a factory to make concentrated fruit juice from pineapple in Long An province.

The factory could run only one week when it ran out of pineapple materials for processing. The investor finally had to stop operation because it could not control the material sources. In order to make 100 kilos of concentrated fruit juice, the factory needed 1,000 tons of pineapples, but it could not find enough materials in Long An.