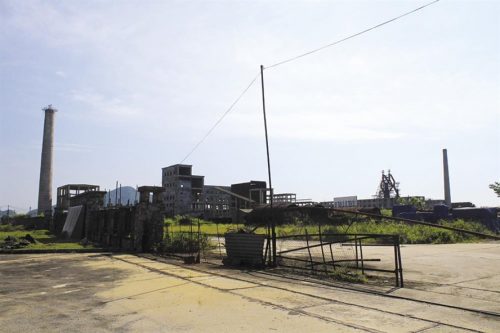 In 2007, the Vung Ang Economic Zone’s management board gave an investment certificate to the Ha Tinh Iron & Steel JSC, which planned to develop the Van Loi steel complex with capacity of 250,000 tons in the first phase and VND500,000 tons in the second phase.

The project was expected to cover an area of 25 hectares, wirh huge registered capital of VND1.7 trillion.

The steel complex planned to churn out commercial steel billets on a trial basis in August 2010. However, things did not go as planned.

Hundreds of billions of dong worth of imported equipment have been left idle in the
open air since 2010. In 2016, Vung Ang EZ revoked the project.

The death of the project hurt several commercial banks. VND750 billion disbursed for the project became bad debt and creditors could only get back the scrap left in the open air for years.

The failure of the project also led to the death of a 500,000 ton per annum iron sorting factory. The VND158 billion factory was set up to provide materials to the steel complex. However, the exploited materials were not sold.

Ha Tinh’s people are proud of Thach Khe iron ore mine, which is believed to be the biggest mine in South East Asia. However, the Thach Khe $1 billion mining project has had troubles since the beginning.

Vinacomin, Vietnam’s largest mineral exploitation group, in late 2016 proposed to resume tmining at Thach Khe. The plan is supported by MOIT (the Ministry of Industry and Trade), but is facing  opposition from MPI (Ministry of Planning and Investment).

MPI cited many reasons to argue that it would be better not to continue the mining, including the immeasurable consequences to the environment and the problems in investors’ financial capability.

The ministry also pointed out that no one can be sure about the consumption of ore. Formosa, the largest steel complex in the central region, doesn’t intend to buy iron ore from Thach Khe.

The government has not made a final decision on the project. However, experts say they don’t think the project resumption has high feasibility.