Football star Huynh Nhu has had her first match for Lank FC, a historic milestone for Vietnam as the first female footballer competing abroad. 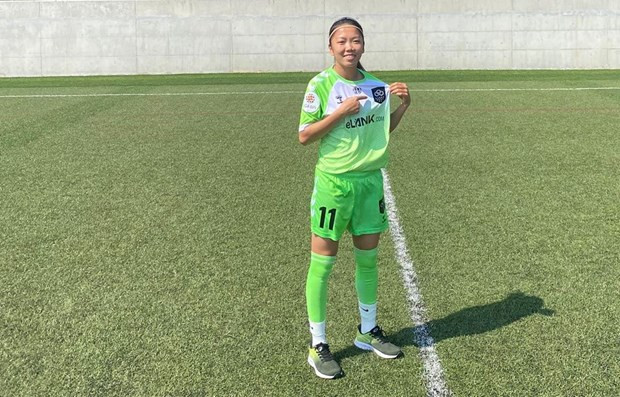 Nhu was put in the field in the 88th minute as Lank FC defeated Valadares 1-0 on away ground in the first tier Campeonato Nacional Feminino in Portugal, on September 11.

Nhu played around 10 minutes including added time and helped the team protect their only goal scored in the 30th minute by Sini Laaksonen.

Despite little time on the field, Nhu also made her mark with a solo attack from the left wing to the box and sent the ball back to her teammates who could not make it an accurate finish.

Earlier, she also supported and created smart passes to teammates even though the striker faced bigger and taller defenders.

"It is my first match wearing a jersey of a new club with a new number in a new land. There are many things that I will have to improve to integrate with my team," Nhu posted on her Facebook page.

"I hope to receive love and support that you have given to me like you have always done in this new routine. Thank you for your encouragement and push. Thank you very much!," the 31-year-old wrote.

Speaking about his newcomer, coach Daniel Pacheco said: "Nhu is integrating into the team that is already very solid, already with great relationships.

"It was easy to integrate her, the team welcomed her well, they understand that she is coming from a completely different context and what I have felt from the working group is a big desire to help her assimilate as quickly as possible.

"She is a player that stands out in technique, she is a high-scoring player, thus we are prepared to enhance all of that within her," he added.

Meanwhile, sport manager Tannu Hanne said: "This contract between Nhu and Lank is significant. We have high and good expectations. We are excited about what she may do here for us and we are confident a lot."

In the next matches, Lank will host Torreense on home soil on September 18 during the Campeonato Nacional Feminino and visit Famalicao on an away match on September 25 during the Portuguese League Cup.

Nhu came to Lank from Vietnam's champion Ho Chi Minh City FC under a one-year on-loan contract with an add-on condition of another year if she performs well.

The Tra Vinh province-born player is one of the best female footballers of Vietnam. She has won the national championship seven times, and the National Cup three times in 2017, 2019 and 2021 and AFF Cup silverware in 2019.

Individually, Nhu has grabbed four Golden Ball awards for the best player of the year. She took four Golden Boot awards as the top scorer and has been voted MVP at multiple tournaments.

She also holds a record of scoring the most goals for Vietnam's national team with 59.
Source: VNS