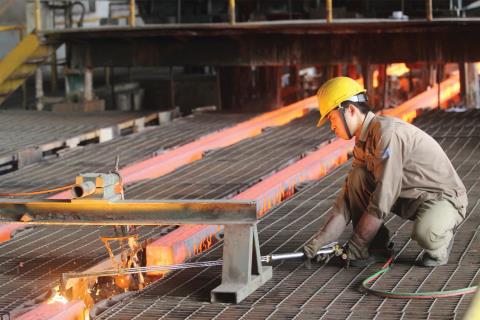 MOIT has been criticized as being ‘too hasty’ in drawing up the steel industry development strategy to 2035.

The Vietnam Steel Association (VSA) said under the draft of the Planning Law submitted by the government to NA, the state would not manage business fields with development programs, but with laws such as the Enterprise Law, Investment Law or Environmental Protection Law.

Therefore, the steel industry development strategy would only be referred to by enterprises before making investment decisions.

Nguyen Thanh Son, former senior executive of Vinacomin, the largest mining corporation, said the steel industry development strategy should be drawn up only after NA approves the Planning Law.

“I think MOIT is too hasty when putting forward the steel industry development strategy by 2035,” he said, adding that if the management of the steel industry is implemented with laws as stipulated in the draft Planning Law, it will have no significance.

Son went on to say that he was surprised about the figures and the steel projects in the MOIT draft development strategy. The steel products MOIT plans to prioritize to develop are plentiful worldwide.

An analyst agreed that MOIT was focusing on products that are readily available in the world but that it ‘forgot’ to name the types of alloys Vietnam needs and cannot produce domestically.

“It is necessary to calculate the steel production cost in Vietnam. If the cost is higher than the average cost in the world, Vietnam would be better to import steel instead of making steel domestically,” he said.

“Vietnam will suffer if it continues trying to make products which are abundant in the world and have low prices,” he explained.

Despite public doubts about the importance of the Ca Na steel complex, MOIT still has included the project on the list of projects to be developed.

Luu Binh Nhuong, a NA deputy from Ben Tre province, asked whether the Minister of Industry and Trade Tran Tuan Anh would resign from his post if the steel project causes serious environmental consequences.

Bui Thi An, an NA deputy, while warning that inaccurate forecasting will lead to immeasurable consequences, proposed that MOIT clarify the basis of the forecasts in the steel industry development strategy and show that the figures are accurate.

An went on to say that it would be better to consult with scientists and experts on Ca Na project.