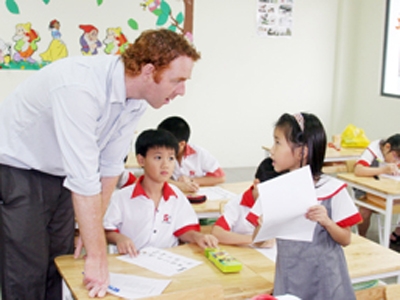 The most outstanding feature of the education establishments introduced themselves as “international schools” is the intensive English teaching curricula applied there. Parents feel secure when sending their children to the schools, because they think that the British, US or New Zealand’s curricula would be better for the children that Vietnamese.

According to the former Director of the HCM City Education and Training Department Huynh Cong Minh, in principle, international schools must be understood as the internationally recognized schools which follow foreign curricula.

This means that a lot of international schools in Vietnam are not “international” at all. They are the Vietnamese schools which teach Vietnamese students. The schools, after getting the permission from the Ministry of Education and Training (MOET) to run foreign curricula at the same time under the mode of bilingual schools. And they call themselves as “international.”

The education quality of the schools is really problematic. Especially, while highlighting the English teaching programs, a lot of schools cannot employ native speaking teachers for long time. In general, the English teachers at the schools only work there under short term labor contracts.

Of these, five schools were set up in accordance with the diplomatic notes to teach the students from France, Germany, Japan, South Korea and Taipei. The schools, following the foreign curriculums, have been put under the control of general consulates.

Also according to Chuong, the advertised purposes and functions of some foreign run schools are not exactly the ones written down in the investment certificates. A lot of schools do not make appropriate investments to ensure high training quality, but just run after profit.

Under the current regulations, foreign run schools are allowed to enroll Vietnamese students, provided that they teach literature, history and geography in accordance with the curriculums set by the Ministry of Education and Training.

However, at many schools, students do not receive enough lessons as required. Parents also think that their children don’t need to learn about Vietnam’s history or geography, because their children would go studying abroad when they grow up. They also don’t care if their children can speak Vietnamese fluently.

Observers warned that the problem has become so serious that at some schools, where the majority of students are Vietnamese, the flag saluting and national anthem signing ceremony is not organized every week.

It is estimated that 12,000 students now study at foreign run schools, including 40 percent Vietnamese students. Nearly 1,400 teachers work for the schools, 70 percent of whom are foreigners.