Investors who bought bitcoins for $35,000 in July will make substantial profit if they sell now, when prices are high. 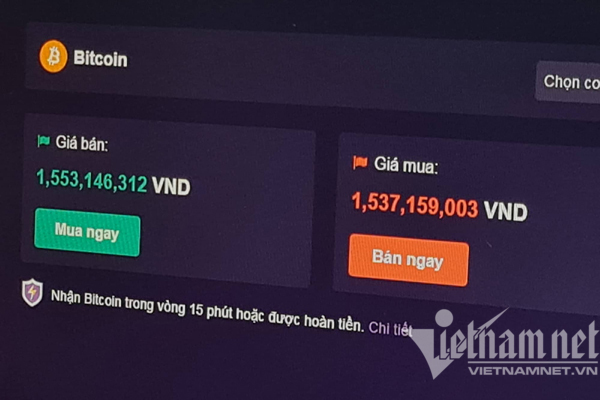 The price of bitcoin, the No 1 cryptocurrency in the world, has been increasing for several days.

The opening price on November 8 was $63,000 and it escalated to $66,000 at the end of the morning. This was the second time since 2009 that bitcoin had reached that price level.

With bitcoin prices galloping, investors are excited. On November 8 morning, the discussions about bitcoin increased among the groups of cryptocurrency communities on social networks.

Viet Thang, an investor in Ha Dong district in Hanoi, who just joined the market in mid-2021, said the capital he has poured into bitcoin has increased twofold thanks to the prosperity of the cryptocurrency.

“I bought bitcoin at $35,000 in late July. If I sell bitcoin now to take a profit, the amount of money I could earn from bitcoin would be much higher than bank deposits,” he said.

However, the investor said with the bank deposit interest rates staying at 5.5-7 percent, he would not sell bitcoin right now but would keep the investment at least until the end of the year.

In the long term, when the bitcoin price sees corrections, he will consider converting a part of his money into bitcoin. This, together with gold, will be a channel for him to preserve his assets.

An analyst told VietNamNet that he believes bitcoin may reach the $70,000 peak this week.

However, though bitcoin prices are increasing sharply, investors are cautious about investments in bitcoin, because bitcoins and other cryptocurrencies have not been recognized as a legal payment instrument in Vietnam.

The Prime Minister in July 2021 assigned the State Bank of Vietnam (SBV) to conduct research and pilot AI-based cryptocurrencies in the 2021-2023 period.

The move is part of a national strategy to promote non-cash payment in Vietnam in the 2021-2025 period.

Cryptocurrency and controversies about the future