Is publishing monopoly is to blame for shortage of textbooks?

VietNamNet Bridge - The new academic year has begun, but some parents and students have been on tenterhooks as they still cannot buy textbooks.

VietNamNet Bridge - The new academic year has begun, but some parents and students have been on tenterhooks as they still cannot buy textbooks. 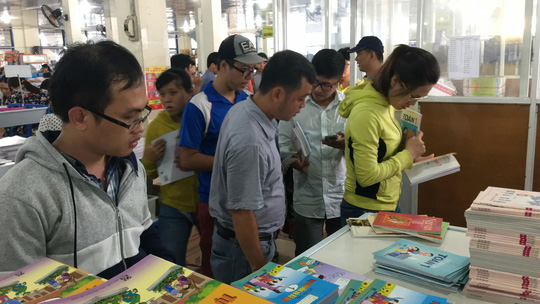 Nguyen Van Tung, deputy editor-in-chief of the Vietnam Education Publishing House, admitted the lack of textbooks in some localities, blaming it on the sharp increase in the number of students.

In addition, textbooks will be replaced as a part of the education renovation program, so local book and school teaching aid companies have lowered the number of printed copies they ordered to avoid too much inventory. This has affected the publishing house’s printing and distribution plan.

In preparing for the new academic year 2018-2019, the publishing house set up its printing and distribution plan based on the numbers of textbooks ordered by the companies, and on the distribution situation in previous years.

To date, the publishing house has released 108.8 million products, or 3 percent higher than 2017.

Duong Van Nhung from the Vietnam Education Publishing House in HCMC also mentioned two major reasons – the sharp rise in number of students in the city and the reluctance to order books in large quantities.

To date, 12 million textbook copies have been distributed in HCMC, including 1.1 million for first graders and 1.2 million additional copies, up by 30 percent compared with the same period last year.

Nhung said that most students have got textbooks and only some still cannot buy all the textbooks they need.

An experienced book distributor said on Dan Viet that the lack of textbooks is understandable. The publishing house had to set the book printing and distribution plan in the fourth quarter of 2017,  a long time before the new academic year. Therefore, the sharp increase in number of students was unforeseen.

In principle, the publishing house can print more textbooks when signs of a textbook shortage appear. However, if printing more books, it would take a loss because the paper price has increased by 1-5 percent, and it cannot raise the selling prices of textbooks.

However, the explanation appeared unreasonable to parents and students.

Headmaster of Dinh Tien Hoang High School in Hanoi Nguyen Tung Lam commented that it was illogical to say the real number of distributed textbooks is higher than initially planned while students still don’t have textbooks.

Lam believes that the problem lies in the monopoly in textbook printing and distribution. The Education Publishing House is the only organization that prints and distributes textbooks.

Price of textbooks to remain same for 2018-19 school year