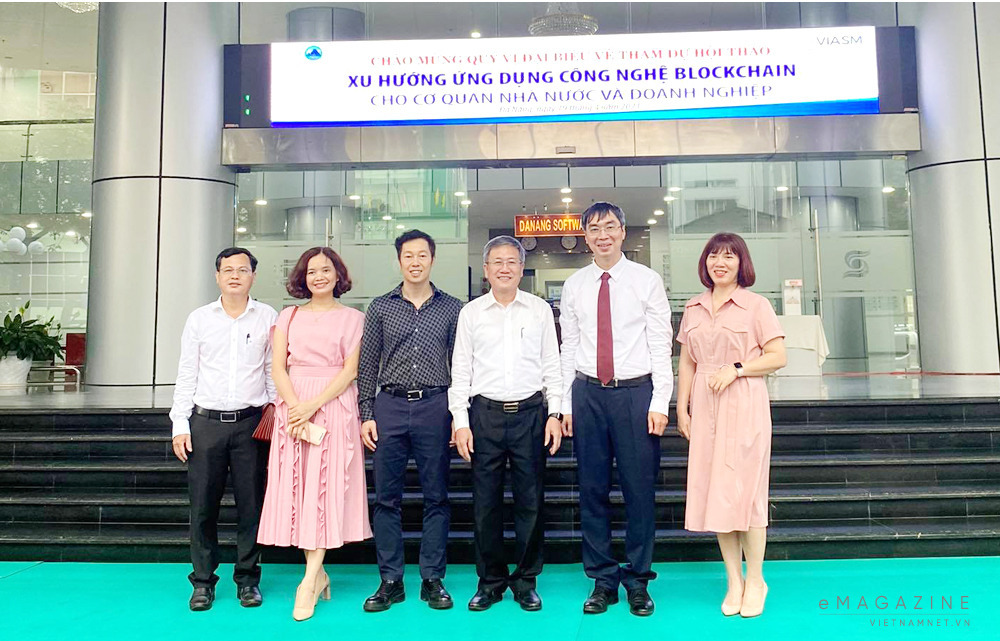 David Tran, associate professor of computer science and director of the Network Computing Lab at the University of Massachusetts, third from left

The space for cryptocurrency is huge and those who stay outside will lose great opportunities. Vietnam should build up a national blockchain network and issue a cryptocurrency managed by SBV, according to David Tran, a Vietnamese scholar working in the US.

David Tran is associate professor of computer science and director of the Network Computing Lab at the University of Massachusetts. He is also a professor at Vin University and collaborator in blockchain at the Vietnam Institute for Advanced Study in Mathematics.

El-Salvador has become the first country in the world recognizing bitcoin as a legal currency. What do you think about this?

This is proof showing that bitcoin not only has a certain value but has a value big enough to be used as a national currency of a country.

However, the fact that one country uses bitcoin as a legal currency has both good and bad sides, depending on the political and economic characteristics of that country.

If the national currency of a country is increasingly depreciating, is unstable, and the state cannot control it, using bitcoin could be a good choice to save the economy. In the case of Salvador, using bitcoin will help the country increase foreign exchange earnings.

However, if a country wants to control the national currency tightly and doesn’t want the central currency to lose its value, recognizing bitcoin as an official currency will pose high risks.

I think that only when bitcoin has stable value will we consider if it is a currency equal to the central currency.

For the time being, what needs to be done is creating a national cryptocurrency (the digital version of the current banknote). From a national perspective, we should have a positive view of bitcoin as well as similar cryptocurrencies.

What are the views of other governments about blockchain and cryptocurrencies?

More governments have shown their interest in cryptocurrencies. In 2019, an economic report from the US Congress to the US President praised the high potential of blockchain in ensuring the security of the US national digital infrastructure.

China since 2016 has considered blockchain as a focus in its five-year economic development plan. Recently, the country has shown aspirations to become the world’s leader in blockchain by 2025.

To date, more than 80 countries have been considering deploying CBDC (central bank digital currency). A lot of large banks in the world have set up funds, networks and programs supporting cryptocurrency operation.

The Prime Minister has asked SBV to study and consider using Blockchain-based cryptocurrency on a trial basis. What is your comment about the move?

The move shows that the government of Vietnam is open to this trend. Vietnam can see opportunities and it is willing to go early to become a pioneer in blockchain. I hope the move will be followed by concrete actions.

Which direction do you think should we go when trying to use blockchain-based cryptocurrency?

I hope Vietnam will run a key program on blockchain. Cryptocurrency should be regulated on a non-concentrated platform, because if relying totally on concentrated servers like those of financial systems, such as the stock market, a mistake or sabortage because of human mistake or computer effort would be enough to cause the collapse of the monetary system.

Israel is experimenting with CBDC on Blockchain. In China, the first version of the cryptocurrency did not run on blockchain, but some experts have advised them to use blockchain. It has set up a National Blockchain Network. I will be very surprised if in the future, they don’t use blockchain.

I think there are three things that need to be done. First, building a CBDC for Vietnam dong. Second, building a national blockchain network which would be a blockchain infrastructure to serve Vietnam’s purposes. Third, allowing people to invest and own cryptocurrency like gold. The transactions would be carried out via the banking system, not via third trading floors, because this would be unreliable and difficult to manage.

No 1 and No 2 are the things China has done. No 3 is the South Korean way. Following the South Korean model will open up opportunities for Vietnam’s banks so they won’t be left out but can avoid assets bleeding form the banking system.

Is it early or late for Vietnam to try cryptocurrency now? What are the challenges and opportunities?

Now is the right time for the government to study and consider deploying cryptocurrency. No need to hurry. It is necessary to prepare carefully, but Vietnam needs to go fast as China spent seven years to create the digital yuan.

Vietnam needs to make heavy invetsments in finance and human resources, because CBDC will have a big impact on the economy and national security.

Axie Infinity capitalizes at US$4.4 billion