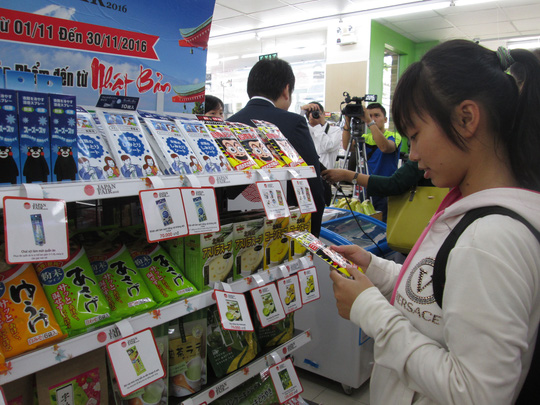 According to Jetro, Japanese food exports were bringing $7.5 billion a year, while the Japanese government strives for an annual 30 percent growth rate by 2019.

In November 2016, Jetro, joining forces with Ministop, FamilyMart and Aeon, the retail chain with 200 shops, will begin selling food products in a program called Japan Fair.

After Japan Fair runs in Vietnam, it will be organized in Singapore, slated for April 2017.

The representative of Jetro said Vietnamese people think Japanese products are expensive. However, there are products that fit Vietnamese pockets, though the selling prices in Vietnam are estimated as twice as much the prices in Japan because of additional expenses.

Jetro has also decided to introduce products in high demand and short supply which have never been sold in Vietnam.

According to Yamanouchi Hirohisa from Family Mart Vietnam, soft pies (VND53,000-60,000 per box) and ice cream have been selling well.

Meanwhile, Akihiko Maeda from Ministop Vietnam, said at his retail chain, 30 percent of Japan Fair’s products have been selling well. Ice cream is the best seller despite the high price of VND33,000-47,000, which is three times higher than the average price in Vietnam.

In HCMC, many shops specialize in distributing Japanese products, such as Daso, Hachi Hachi and Tokyo Mart. Tokyo Mart sells the rice imported from Japan at the price of VND140,000 per kilo, 10 times higher than the average price in Vietnam and 5 times higher than high quality Vietnamese rice.

Nguyen Van Ngai from the HCMC Agriculture & Forestry University said that many types of food and farm produce can be made or grown in Vietnam, but Vietnamese consumers believe Japanese products are safer. Vietnamese consumers, with improved living standards, are willing to pay higher prices to get safe products.

Zing News quoted analysts as reporting that Japanese products have for many years been preparing the infrastructure and learning the market thoroughly.

Not all Japanese products will be brought to Vietnam immediately, but will penetrate the market gradually. Food, cosmetics and fashion products will come to Vietnam first through retail channels, especially convenience stores.