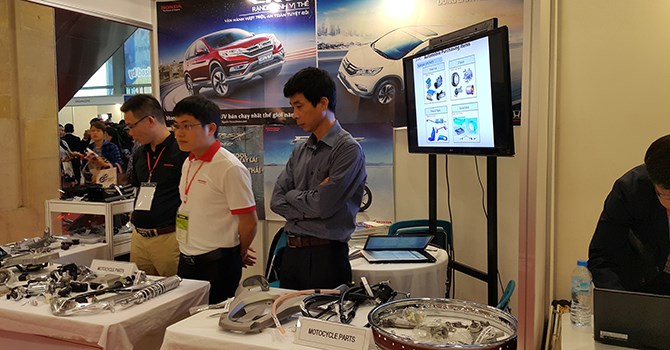 Japan is among the top foreign direct investors in Vietnam, with 70 percent of Japanese enterprises planning to expand investments here.

However, they have faced problems in doing this, partially because of the weak local supporting industries.

Atsusuke Kawada, JETRO’s Chief Representative in Vietnam, said at the opening ceremony of the 2017 Japan Parts & Processing Exhibition that 70 percent of Japanese enterprises are meeting difficulties in looking for local part and accessory suppliers.

“Though the locally made content ratio has increased to 34 percent, product localization remains a big problem for Japanese enterprises in the manufacturing sector,” he said.

JETRO supported 20 Japanese enterprises to attend the exhibition as buyers. This was the first time JETRO used a pre-matching system which allows enterprises to connect and exchange in a more effective way.

According to the organization, the localization ratio in 2016 represented a slight increase compared with 2015’s ratio of 32.1 percent.

Japanese enterprises want to find Vietnamese parts suppliers so as to reduce the production costs and increase competitiveness. However, the local supporting industries remain weak after many years of development.

A representative of Honda Vietnam told the press at an exhibition that 90 percent of Honda motorbike parts are made in Vietnam, while the localization ratio in car products remains very low, just 16 percent.

Nguyen Ngoc Thieu from RICOH Imaging Vietnam said the company uses 100 suppliers, and only 25 are from Vietnam. But none of the Vietnamese companies can supply components and spare parts.

“Only a few of them can provide plastic bags and porous boxes. In the past, some Vietnamese companies could make cardboard packaging, but they cannot maintain the quality of products in both size and cleanliness. Therefore, we have to buy products from Japanese enterprises,” he said.

“Some Vietnamese enterprises want big orders, though they are not large-scale enterprises. Therefore, they lost customers,” he said.

Developing supporting industries is a big goal for Vietnam. It plans to raise the locally made content ratio from less than 50 percent to 65 percent in textiles & garments, from 40-45 percent to 75-80 percent for footwear and satisfy 60 percent of demand for input materials for domestic industries.