Japanese to be taught at primary schools in Hanoi, HCMC

The Japanese language is being taught at some primary schools in Hanoi and HCM City, on a trial basis.

The Japanese language is being taught at some primary schools in Hanoi and HCM City, on a trial basis. 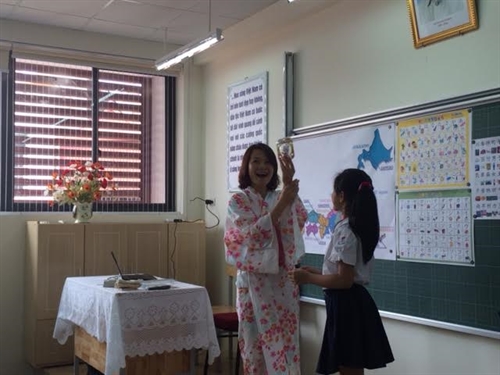 Studying Japanese at Chu Van An School in Hanoi.

An opening ceremony for Japanese language classes at primary schools in VN was held yesterday at Chu Van An primary school in Hanoi, with the participation of representatives from the Ministry of Education and Training and the Japanese Embassy in VN.

In a letter sent to students, Japanese Ambassador Extraordinary and Plenipotentiary to VN Fukada Hiroshi said language was a foundation for cultural exchanges among countries.

Those students learning Japanese language would contribute to the development of relations between Japan and VN, he said.

First Secretary and Head of the Japanese Embassy’s Department of Culture and Information, Anazawa, said Japanese language was taught for students beginning in the third grade, which was quite early, but the younger the students are, the better they can learn.

The program is being carried out on a trial basis at four primary schools during the 2016-2017 academic year, including Nguyen Du, Khuong Thuong and Chu Van An schools in Hanoi and VN-Australia school in HCM City.

Japanese language classes are expected to be expanded nationwide for all primary schools in the future.