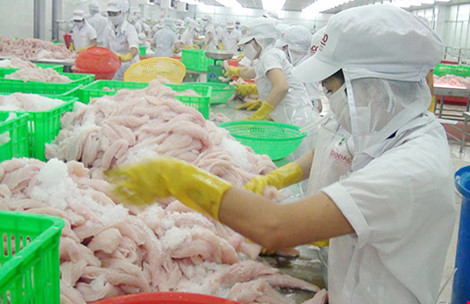 Sugar refineries are the plants which first suffered from the material shortage. A series of refineries have halted operation.

According to Long, as the expected profit from sugar cane plantation is modest, farmers have chopped down sugarcane to grow other crops such as fruit trees and short-term crops. As the sugarcane output has decreased, sugar refineries lack materials.

Refineries, while looking for materials to fulfill export contracts, have to collect sugar cane at high prices. As a result, they have to sell products at high prices, which cannot compete with cheap smuggled imports from Thailand.

The problem, plus the serious drought and saline intrusion, have worsened the refineries’ situation and forced them to halt production, or they would incur heavier losses.

“We have refused some high-value contracts,” he said. “We now have to buy materials at high prices, but the supply is still short.”

With the catfish output in 2016 predicted to decrease by 40 percent, the thirst for materials at catfish processing factories is foreseeable.

“As catfish prices were too low, which could not ensure profit, farmers have given up farming,” secretary general of the Vietnam Association of Seafood Exporters and Producers (VASEP) Truong Dinh Hoe explained.

It is now the high harvesting time, but the cashew nut supply is short because of prolonged drought.

Meanwhile, processors cannot get imports delivered. Contracts were signed with the partners from Ivory Coast and some other African countries, but partners have refused to deliver products, while raising prices.

However, Long from the sugar association said while many enterprises are ‘half dead with hunger for materials’, others still can live well as they can control the material supply.

TTC Group, for example, has the production cost at VND510,000 per ton, equal to that of Thailand, because it has been joining forces with farmers to develop sugar cane fields with the high yield of 90 tons per hectare.