A landslide that occurred several days ago in Hong Ngu commune in Dong Thap province killed a 90-year-old woman. 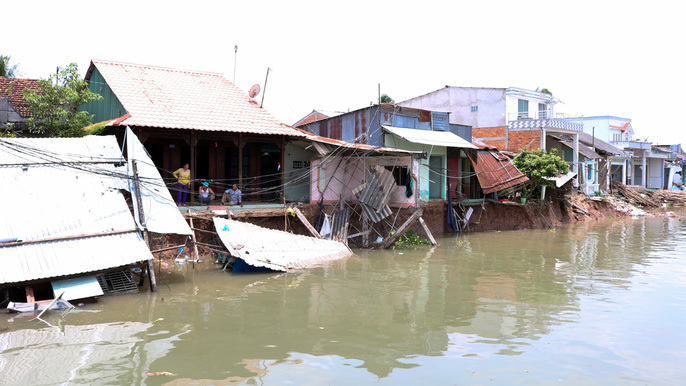 According to the Bac Lieu province’s Steering Committee for Disaster Prevention and Rescue, tens of riverbank erosion cases occurred in recent days, causing severe damages to people’s assets. About six houses were partially damaged and 70 other houses had cracks, affecting the lives of 400 people.

Tran Hai Dang, 37, in Ho Phong ward, complained that landslides had been occurring in the last 10 days.

“It occurs every night and ‘swallows’ 2-3 inches of land. We have to evacuate to avoid possible damage,” Dang said.

In Can Tho City, two landslide cases occurred in VInh Thanh and Cai Rang districts some days ago.

By the end of June, 14 landslide cases had occurred in six districts of the city. The total length of landslide spots is 300 meters, with 24 houses affected. Of these, six houses have been completely lost, with damages worth VND1.4 billion.

According to the Ca Mau Department of Agriculture and Rural Development, over the last 10 years, the land has lost about 8,870 ha of coastal forests, leading to a risk of the west sea dike break. This has seriously affected life and production, and threatened the lives of hundreds of thousands of households.

Nguyen Van Cuong, 45, in Nguyen Viet Khai commune, has two hectares of aquaculture land. Since the protective forest section is weak, which has been broken by sea waves, the shrimp ponds are in danger of disappearing.

“Just within one month, I had to build and consolidate the shrimp ponds twice with the total cost of VND20 million. However, I am at risk of losing all,” he complained.

Vo Hung Dung, deputy director of the Department of Natural Resources and Environment of An Giang province, said in June, the An Giang Provincial authorities declared a state of emergency at the landslide site of Tan An canal and Cai San arroyo in Long Xuyen City. Eight land erosion cases have occurred in the province so far this year, causing damages worth VND2.5 billion.

According to Dinh Cong San, deputy director of the Natural Disaster Prevention Center, landslides occur in Mekong Delta because the alluvium from Mekong River’s upper course to the delta has decreased dramatically.

As of May 29, floods, whirlwinds, and landslides in Vietnam’s northern region killed two people and injured two others, while causing heavy property losses.