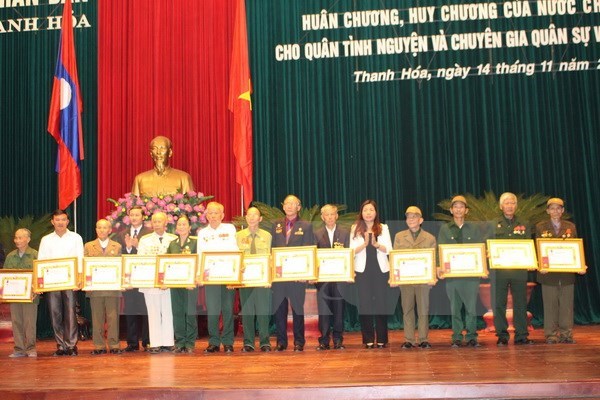 A ceremony was held in the central province on November 14 to present the awards.

Speaking at the ceremony, Le Hong Ngoan, head of the provincial voluntary force liaison agency, said Thanh Hoa has sent thousands of soldiers and experts to Laos to fight for the neighbouring country’s liberation.

More than 1,700 of them were bestowed upon with Lao orders for victory and freedom and medals for contributions to Laos’ resistance war against French colonialists, he added.

Le Thi Thin, Vice Chairwoman of the provincial People’s Committee, said the orders and medals are an honour to both their recipients and the province.

She urged called on relevant Vietnamese and Lao agencies to continue searching and repatriating remains of Vietnamese martyrs, and help their families escape poverty.

In 1945, the Vietnamese and Lao governments signed an agreement on the Vietnam-Laos cooperation and support and formed the Laos-Vietnam joint army to protect each country’s independence.

On October 30, 1949, the Politburo of the Communist Party of Vietnam’s Central Committee established the Vietnamese military force in Laos, which was called “Vietnamese voluntary soldiers”.