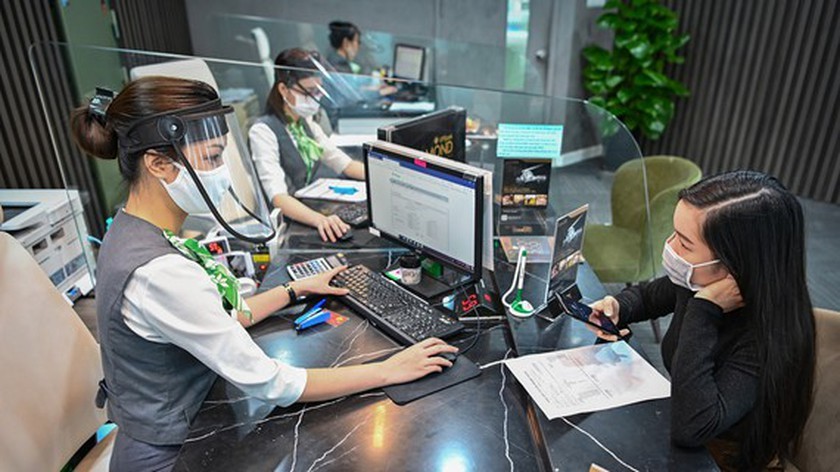 However, it is recorded that many banks still keep lending interest rates at the "supportive" level for people and enterprises to do business and production.

By May 26, the overnight interbank interest rate still gradually approached the mark of 1.5 percent per annum. This is also the highest level since the second half of February this year until now. The fact that banks borrow money from each other at high-interest rates shows that bank liquidity is no longer the same as before. In the context that savings interest rates are kept at the lowest level since 2017 to now, capital mobilization of the banking system in the first months of this year is much lower than credit growth.

Specifically, by April 16, credit growth increased by 3.34 percent compared to the end of last year, but capital mobilization showed signs of slower growth than credit. According to the latest data, by March 19, capital mobilization growth merely reached 0.54 percent, while at this time, credit had already risen by more than 1.5 percent.

In Ho Chi Minh City, credit growth in the first four months of this year surged by 3 percent, much higher than the growth rate of deposits, when it edged up by only 0.65 percent. Explaining this situation, Dr. Nguyen Tri Hieu, a finance-banking expert, said that capital mobilization growth was lower than credit growth, so the liquidity of the banking system was weakening, leading to a sharp increase in the interbank interest rates in April and May.

A representative of Bao Viet Securities Company (BVSC) said that the interbank interest rate unexpectedly soared from nearly zero percent per annum to 1.41 percent per annum, reflecting the situation that small lenders have started to lack capital. According to BVSC's statistics, in early May 2021, deposit interest rates at small banks, whose capital is below VND5 trillion, increased by about 0.06 percent per annum compared to the previous month for six-month and 12-month terms.

Meanwhile, those of large commercial banks were almost unchanged. Some banks only increased slightly by 0.01 percent per annum, but some banks even reduced interest rates. State-owned banks still maintain the deposit interest rate levels of the previous month because the average interest rate of this group of banks is at the lowest level in the market.

“Although the interbank interest rates climbed sharply, it was still not as high as those during the peak period near the last Lunar New Year, when the overnight interest rate was about 2.5 percent per annum, so the situation was not tense.

This is also shown by the fact that in the last week of May 2021, none of the banks need support from the SBV on the mortgage channel because there are no new transactions," the representative of BVSC said.

Harmonizing the interests of depositors and borrowers

Recently, as the savings interest rates are low, a certain amount of money from the savings channel has flowed through other investment channels, such as bonds, stocks, and real estate. To make up for that, banks have to mobilize a large amount of long-term capital through bond issuance.

From the movements of commercial banks, many experts said that currently, liquidity was quite good, so interest rates would remain stable in the immediate future. They added that the banking industry must balance the interests of both depositors and borrowers in the context of inflation and exchange rate fluctuations to offer suitable lending interest rates for people and enterprises.

Although input interest rates are low, many banks still offer credit packages with good interest rates to push capital to the market. Specifically, PVCombank has just launched a loan package of VND9 trillion with a lending interest rate of 5 percent per annum upwards for both individual and corporate borrowers.

Recently, MSB also kicked off a preferential financing package only for enterprises participating in public investment projects with a policy of financing 100 percent of capital without collaterals and a loan limit of up to VND15 billion, approved in 24 hours. MSB also increased the maximum funding limit of VND200 billion based on the output contracts of enterprises. As the bank with the highest credit growth in the banking system, the leader of Vietcombank affirmed that it would maintain interest rates at a low level and improve the credit granting process to support customers to access capital.