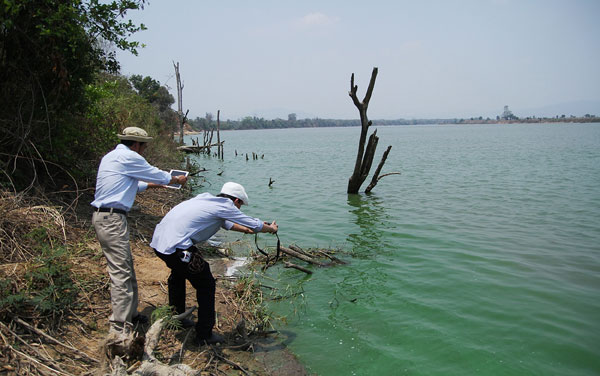 Since the day the An Khe – Ka Nak hydropower plant was put into operation, it has been taking away water to generate electricity, depleting and polluting the lower course of the Ba River.

Things got worse recently when the river section which runs across Krong Pa district of Gia Lai province turned abnormally green and gave a fishy smell.

Ksor Chop, a man from Chu Ngoc commune, said Ba’s water had never been so green and thick until April 2016.

“In the past, the river water was a natural blue,” he said. “Since it has turned abnormally green, no one dare going fishing anymore.”

This has upset the lives of Ksor Chop and other fishermen in Sai Hamlet. Chop said that since the day the river’s water changed color, it has been difficult to catch shrimp and fish. In the past, Chop could find 2-3 kilograms of fish on the river every day, but now he can catch one kilogram only.

However, locals still use Ba’s water, filtering every drop of water with a sand filter tank.
Though they are afraid of getting sick because of the dirty water, they don’t have any other choice.

Deputy chair of Chu Ngoc commune Ha Van Vinh said Ba is the major source of water for local people to use in daily life, agricultural production and husbandry.

However, the only source of water has become polluted recently with algae covering the surface. The situation is so serious that even the cattle dare not drink the water of the river sometimes.

The Krong Pa Environment Sub-department, after receiving the people’s complaint, took water samples for testing and reported the case to provincial agencies.

According to Nguyen Chi Quang, head of the sub-department, this is ‘eutrophication’, the phenomenon occurring when the river’s water contains high volume of organic waste. The current hot weather encourages the bloom of microalgae.

In principle, after the microalgae multiply, they will die in three or four weeks. If so, the river’s water will turn red and polluted and the microorganisms will die.

“All the current conditions lead to the multiplication of microalgae, including hot weather and scorching sun. The river is exhausted because the An Khe-Ka Nak hydropower plant has blocked the river stream,” Quang said.

Also according to Quang, similar phenomena occurred in previous years, but the water now is a deeper green.