Chef of Hanoi’s Fortuna Hotel, Kenji Tam, who has been recently awarded first prize at ‘The Best Taste’ contest, presented a set of three dishes, inspired by the atmosphere of Tet in Vietnam.

Chef of Hanoi’s Fortuna Hotel, Kenji Tam, who has been recently awarded first prize at ‘The Best Taste’ contest, presented a set of three dishes, inspired by the atmosphere of Tet in Vietnam. 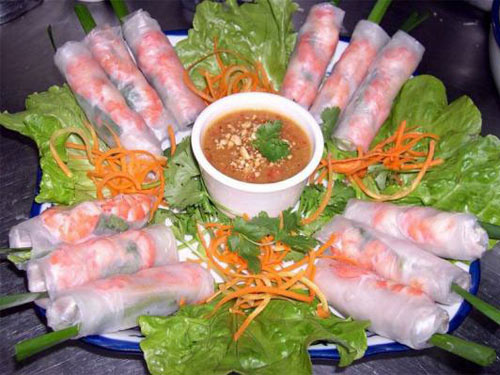 It can be said that his love for Vietnam cuisine helped him to bring a new understanding and set of skills to his cooking, Nhan Dan newspaper reported.

Working and living in Vietnam over the past six years, for Kenji Tam the time spent in Vietnam has been a journey of discovering the nature, culture and people of the country.

Kenji Tam’s parents are cooks in Malaysia; therefore his love for cooking was instilled in him from an early age. He learnt about cooking and forged his impressive culinary skills living in Japan over seven years. At the age of 24, he became the Head Chef of Asian cuisine in Shinjuku, Japan.

It seems it was this combination that helped the chef to win first prize in the ‘The Best Taste’ contest held in January 2015. The contest brought together chefs from 12 top hotels and restaurants in Vietnam.

Using ingredients common in Vietnamese cuisine, Kenji Tam’s three dishes at the contest featured distinct tastes of Vietnam. Especially, his dessert, inspired by images of peach blossom and apricot blossom, along with a red envelope of lucky money, which was considered as a gift from the chef on the occasion of the New Year.

Sharing the first dish he fell in love with when first arriving in Vietnam, Kenji Tam said Ca kho to (Vietnamese fish braised in a clay pot) is “the best food in the world”. The Vietnamese woman who cooked the dish for him now just so happens to be his wife.

He said that the Ca kho to was reminiscent of California Maki, which is a Japanese dish with influences from California. He cherishes the idea of making Japanese food with Vietnamese influences.

Vietnamese street is what first attracted the chef to Vietnamese food, bringing with it interesting experiences that are missed when dining in large restaurants, according to Kenji Tam.

Kenji has welcomed the Lunar New Year in Vietnam four times, each year bringing many different memories, but all Tet holidays in Vietnam offer him the feeling that he is living in his fatherland.

On this year’s Tet holiday, Kenji Tam will visit Nam Dinh, Hung Yen and Thai Nguyen provinces with his employees. He is eager to participate in traditional activities preparing for the Lunar New Year in Vietnam such as making Chung cake or cooking traditional Vietnamese dishes served at Tet. The more he grows to love Vietnam, the more he wants to learn and understand about Vietnamese cuisine and culture.