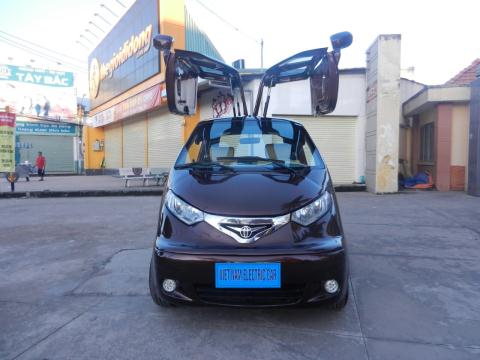 Tam's car is a sedan

The vehicle has maximum speed of 50 kilometers per hour and when fully charged, it can run 160 kilometers before it needs recharging.

Charging can be done anywhere with 220V power. There is an air conditioning and karaoke system connected to the phone via bluetooth.

The two side doors of CITY 18, when opened, look like eagle’s wings thanks to the hydraulic system.

Tam said he has spent VND500 million to make the car.

He believes that if the car can be made on an industrial scale, and the production cost would be much lower. Kia Morning is now the smallest and cheapest car available in Vietnam and he hopes his car, if manufactured, is priced at half of that, so that 45 million Vietnamese can have electric cars to drive.

Tran Huu Nhan from the HCMC Science & Technology University is cautious when commenting about the car. He said the world’s large automobile manufacturers are focusing on these kind of cars in the context of fossil fuel depletion.

However, the biggest problem that needs to be settled in Vietnam is fuel use, not technology, he said

According to Nhan, the development of electric cars in Vietnam needs to begin with the assembling of car parts imported from other countries, as support industries in Vietnam remain weak.

Asked about the feasibility of putting CITY 18 into commercial development, Do Van Dung, Rector of the HCMC University of Technology Education showed his doubts.

He said it is easy to make a car by assembling car parts, but it is more difficult to manufacture cars on an industrial scale.

To organize production on an industrial scale and make a profit, manufacturers have to make 100,000 products at least.

In principle, one manufacturer cannot make all the components needed for a car. This means that there must be many enterprises involved in the production process.

Will an investor for Tam find support enterprises that make car parts for him if he intends to produce 50,000 cars only? With such a small amount of products, no one would make profit. The investment rate for one factory is very high as well.