Note Verbales of France, UK, Germany and the legal war in the East Sea

VietNamNet introduces an article by Ambassador Nguyen Hong Thao on this issue:

The note verbales show the view against the seven diplomatic notes China proposed for circulation at the United Nations relating to Malaysia’s submission on continental expansion submitted to the UN Commission on the Limits of the Continental Shelf (CLCS).

This was the first time that these three powerful countries had submitted note verbales related to the East Sea and the 1982 UN Convention on the Law of the Sea (UNCLOS) to the UN Secretary-General.

The consistency of the three major European countries

The note verbales expresses the consistency of the three countries with the biggest economic and legal political influence in Europe in rejecting China's unilateral interpretation of a series of related issues, which cause instability, and affect peace and legal order in the East Sea.

The notes show support for the common voice of notes and letters from the Philippines, Indonesia, Malaysia, Vietnam, Brunei, Australia and the United States on common perceptions of issues arising in the East Sea. France, the UK and Germany emphasized the global and consistent nature of UNCLOS in establishing a legal framework for maritime activities worldwide and the uniform integrity of the Convention must be maintained on the global scale.

Freedom of the sea

This has the meaning of refuting the "Hainan - Xisha maritime zone" in the "Technical rules for statutory examination of ships in domestic voyages". This document was issued in 1974 and China amended it to localize the waters between Hainan and the Hoang Sa (Paracel) Islands from August 1, 2020, violating Vietnam's sovereignty and hindering freedom of navigation of international vessels.

France and the UK as well as Australia are countries with offshore islands listed in 19 cases applying archipelagic baselines to offshore islands by China International Law Association’s document in 2018 to justify the act of drawing the archipelagic baseline in Hoang Sa and the attempt to apply the concept of so-called Nanhai Zhudao (the South China Sea Islands), Xisha, Nansha, and Zhongsha (as the Chinese names islands in the East Sea) in the future.

The note verbales affirmed that there is confusion between the application of part 4 of UNCLOS to the archipelagos and land features of a coastal state covered by part 2 of the Convention. Part 4 can only be applied to archipelagic country.

There is no legal basis to disrespect the relevant provisions of part 2 or knowingly apply section 4 to the islands and land features of the coastal state. UNCLOS has no provision to justify such action.

The reactions of the three European countries have two meanings. These countries do not recognize China's argument that there is an international custom of applying archipelagic straight baselines to the islands of the coastal state. They also do not admit that drawing the archipelagic baseline for the so-called Nanhai Zhudao or Xisha, Nansha, Zhongsha will treat the waters lying within that self-defined baseline as archipelagic waters.

France, the UK and Germany also affirmed that the provisions of the legal regime of the islands under Article 121 of UNCLOS are applicable to naturally formed land features. Therefore, reclamation activities or any form of man-made transformation cannot change the characteristics of a feature under UNCLOS. This is also the conclusion of the Permanent Court of Arbitration (PCA)’s ruling in 2016 and the content of recent notes of Malaysia, the Philippines, Indonesia, Vietnam, Australia and the US.

It was not a surprise when the three European countries rejected historic rights claims and reiterated that the PCA’s ruling clearly affirmed these points. All three countries did not forget to reiterate that the Joint Note Verable reflects their traditional and consistent legal point of view and this point only adds to, and does not affect past claims, even in bilateral relations and relations with other member countries of the UNCLOS.

Europe is the player, not the playing field

France, the UK and Germany did not comment on any relevant notes from the countries in the region on their sovereignty claims over land features and extended continental shelf.

This stance demonstrates neutrality against these claims. These countries attach great importance to the peaceful settlement of maritime disputes in the East Sea in accordance with the principles and rules of UNCLOS and the dispute settlement methods and procedures intended by the Convention, including mandatory mediation and arbitration.

The notes were released in the context of the US-China competition and Europe's dilemma in the relations with the two partners. Europe has been increasingly tough, as European Council President Charles Michel said: “Europe is a player, not a playground."

Although it is very interested in trade relations with China, Europe, including the countries inside the EU and outside the EU, cannot ignore the abuse of international law. European support further reinforces the legitimacy of the forces fighting for the integrity of the UNCLOS, considering the Convention as the only legal basis for resolving maritime disputes in the East Sea. 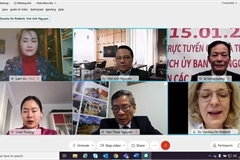