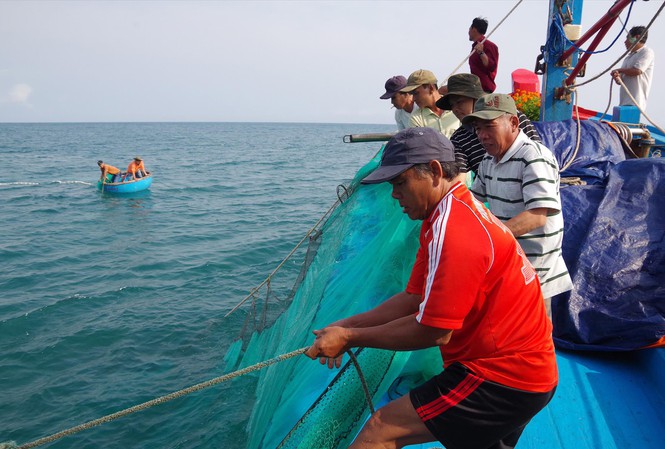 The Sa Ky Fish Port in Binh Son District is still busy with boats coming in and out.

Boat QNg 95122 TS has just arrived full of fish after more than a month in the Paracel Archipelago. The boat owner, Nguyen No was preparing foods and fuel to continue his next trip.

Asked about the China's recently-announced fishing suspension in the area, the fisherman said that he heard about it but did not care because it was groundless.

"We fishermen in Quang Ngai all know about the ridiculous ban and were very angry at it," he said.

The Spratly and Paracel Islands have been our traditional fishing grounds for years. Although we have been facing some difficulties with bigger Chinese vessels chasing and attacking our boats, we will still continue to fish there."

A boat owned by captain Tran Hong Tho was attacked by a Chinese vessel on April 2, 2020. He lost billions of VND in the damage but is still preparing for the next trip despite the Chinese suspension.

At Ly Son Island District, there are 60 boats with 850 fishermen who are working at the Spratly and Paracel Islands. Local authorities are calling on fishermen to continue going to sea to earn their living and contribute in protecting the country's islands.

"They steal our fishing equipment and beat the fishermen," he said. "But we are determined to protect our Spratly and Paracel Islands."

Authorities of the cities and provinces must direct competent agencies to enhance management and inspections over the exploitation of fishery products in waters, especially the departure times of fishing vessels.

Localities are also asked to promptly report contingencies relating to fishing vessels and fishermen to the hotline of the Vietnam Fisheries Resources Surveillance, at 024 6273 7323.

The Chinese Bureau of Fisheries is implementing the suspension of fishing from 12am on May 1 to 12am on August 16 in various waters, some of which are within Vietnam’s sovereignty in the East Sea (internationally known as the South China Sea). Tienphong/Dtinews

Philippine Defense Secretary Delfin Lorenzana has raised alarm over China's holding of military exercises in the East Sea, saying the move could create tension in the region and impact Beijing’s relationship with its neighbours.

Vietnam has issued a note to China to protest an illegal military drill conducted on islands that rightfully belong to Vietnam.

The move provides the legal rationale for naval and air operations.

The US is the fifth countries protesting China's claims in the East Sea.

Vice Spokesman of the Foreign Ministry Doan Khac Viet on May 28 repeated that all activities without Vietnam’s permission in the Hoang Sa (Paracel) and Truong Sa (Spratly) archipelagos are valueless.