Authorities of several localities in the Mekong Delta have proposed three route options for building the 150-km long Can Tho – Ca Mau expressway.

Deputy Minister of Transport Nguyen Nhat early this week met with leaders from the southern provinces of Can Tho, Hau Giang, Soc Trang, Bac Lieu and Ca Mau to discuss the expressway proposal. 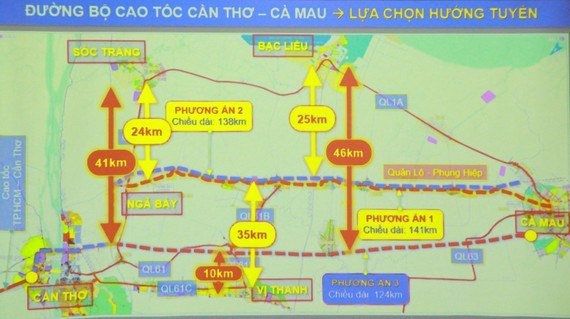 At the meeting, a representative of the project’s consulting unit suggested building the expressway between Can Tho city and Ca Mau province. It would have four lanes, with a maximum speed of 100km per hour.

Under the plan, three route plans were proposed.

Vice Chairman of the Can Tho City People’s Committee Duong Tan Hien said that options one and two were consistent with Mekong Delta transport planning approved by the Prime Minister.

Option two would further promote connectivity among the main cities of Hau Giang, Soc Trang and Bac Lieu provinces, which is important for economic development of the entire region.

They added that option one would potentially pose some technical problems, and option three would make it inconvenient for Soc Traang and Bac Lieu provinces to stay connected with the expressway.

Earlier, Prime Minister approved building the Can Tho – Ca Mau expressway between 2021 and 2025. The entire expressway would be divided into two sections, one being Can Tho – Bac Lieu and another Bac Lieu – Ca Mau.

Speaking at the meeting, Nhat said the Ministry of Transport would collect feedback from localities and complete a report by the end of this month.

The Dong Tam Group held an inauguration ceremony for the first phase of the Long An International Port in Tan Lap commune, Can Giuoc district, the southern province of Long An on September 26.

Farmers in the Mekong Delta’s upstream areas are waiting for the flood season, which brings sediment to rice fields and other areas of aquatic resources.