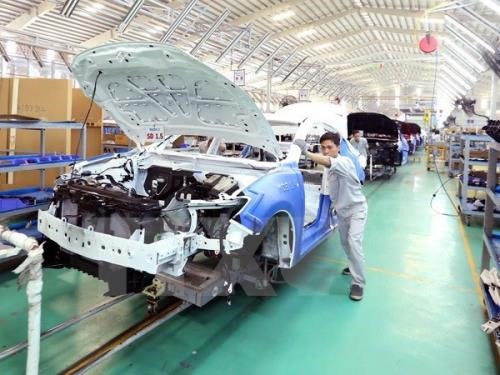 Its WTO commitments require Vietnam to maintain a tax level on import auto components between zero per cent and 30 per cent. Officials say the tax changes will also serve domestic interests.

Speaking at a press conference at Smart Industry World 2017 in Hà Nội on Wednesday, Deputy Minister of Industry and Trade Do Thang Hai said the import tax cuts would bolster auto production in Vietnam by leveling the playing field between imported vehicles and vehicles made in the country with imported parts.

“Automakers said that they had not received much support from the State, but the Government’s coming document will create fair play for businesses,” Hải said, according to plo.vn. “Automakers and auto assemblers only need to be treated as fairly as auto importers.”

The automakers have invested thousand, even dozen thousand billions of đồng , but there is still an unreasonable thing that the import tax on auto parts is higher than that of complete built-up units, said Hai.

In a draft document currently being sent to relevant ministries, sectors and associations to collect ideas, the finance ministry presents two methods for implementing the tax cuts, which will apply to parts that are used to assemble cars with nine seats or fewer and trucks with capacity of five tonnes and below in Vietnam. The document will be submitted to the Prime Minister for approval in the future and would be in effect from January 1, 2018 to December 31, 2022.

In the ministry’s first proposed method, the import tariffs on 163 auto parts will be down to zero per cent. Accordingly, the average tariff of the set of auto components will be reduced from 14-16 per cent to 7 per cent for the nine-seat cars and to 1 per cent for trucks.

In the second method, the ministry wants to decrease import tariffs on 19 parts including engine, gear-box, automatic transmission system and fuel injection pump, which are not produced in Vietnam, from 3-50 per cent currently to 0 per cent. Under this plan, the average import tax on the set of auto components would decrease from 14-16 per cent to 9-11 per cent for cars and to 7.9 per cent for trucks.

According to the finance ministry, both methods encourage businesses to manufacture and assemble autos locally. Officials say the cuts would increase competitiveness with imported cars, support the local industry, increase domestic consumption and promote exports.

To benefit from the tax cuts, the ministry said the automakers would have to reach an annual growth rate of 16-18 per cent and 40 per cent of production value must be accrue locally, in line with the national automobile industry development programme. Automakers that don’t hit the targets will pay higher taxes on imported parts.

With this requirement, the ministry said three may be already qualified to join in the programme. According to the Tien Phong (Vanguard) Newspaper, they are Toyota Motor Vietnam, Hyundai Thanh Cong and the Truong Hai Automobile Corporation.

There may be one business qualified under these regulations, said the ministry.

Autos must also meet emissions and fuel consumption standards. The cars are required to have engine displacement of 2,000cc and below, meaning they must be relatively fuel efficient. The cars must also consume less than seven litres to travel 100km, and cars and trucks must meet strict European exhaust emission standards.