MOET struggles for the right to compile textbooks

The Ministry of Education and Training (MOET) said it must be involved in compiling a set of textbooks for every grade, but the public does not support the idea.

VietNamNet Bridge – The Ministry of Education and Training (MOET) said it must be involved in compiling a set of textbooks for every grade, but the public does not support the idea. 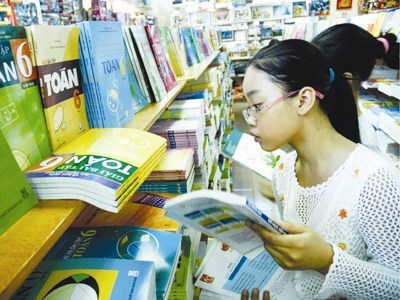 Other National Assembly Deputies agreed that MOET should not compile textbooks. It should only build curricula for grades, to which textbook compilers will refer.

“MOET now undertakes a lot of duties, but it still wants to take on the compilation of textbooks. Will it have time to work as a state management agency in education?” asked Professor Nguyen Minh Thuyet, former chair of the National Assembly’s Committee for Culture, Education, the Youth and Children.

Meanwhile, an analyst who asked to be anonymous, commented that if MOET also compiles textbooks, it will act as both the referee and the footballer.

Luan, however, said it is necessary for MOET to set up standard textbooks which other compilers can refer to.

He also emphasized that the textbooks to be compiled by MOET do not have to be used by students and teachers, and that they have the right to choose the textbooks.

However, the analyst commented that the public does not think that MOET can put out the best textbooks for students.

“They don’t trust MOET anymore after they saw what the ministry did,” he said, referring to its proposed huge budget of VND34 trillion for textbook compilation that was later cut to VND450 billion amid strong protest from the public.

“What will happen if MOET’s textbooks are refused by general schools,” said Nguyen Thi Doan, the country’s Vice President, implying that the huge money to be spent by MOET will be in vain.

However, if the textbooks cannot meet the standards, local education departments have the right to refuse to use them. If they do, who will take responsibility for the textbooks and the state funds spent on them?