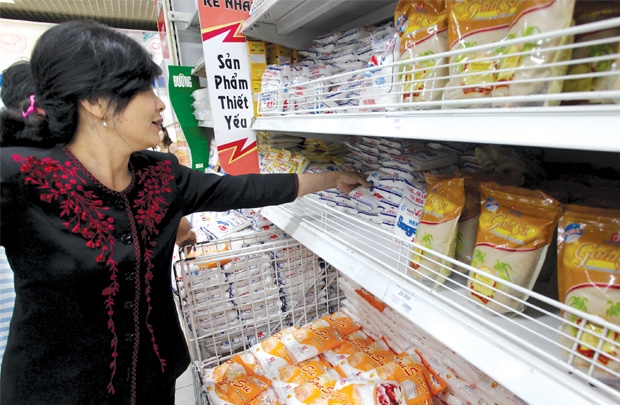 VSSA, the Vietnam Sugar and Sugar Cane Association (VSSA), has mentioned the issue in a document on the draft government’s decree on sugar import/export tariff, proposing to raise the import tariff in case Vietnam’s sugar industry is affected by  imports.

VSSA has also mentioned the Vietnam-Laos Border Trade Agreement made public on June 27, 2015.

The association, while agreeing that it is necessary to promote trade between Laos and Vietnam, pointed out that Vietnam gives ‘high preferences’ when imposing zero percent import tariff and VAT rate, and exempting from a series of technical barriers on import products made by Vietnamese investors in Laos.

The sugarcane yield in Vietnam remains low due to many reasons, including bad soil, weather conditions and limited land area for cultivation, which places difficulties for  sugar production. The situation will be even more serious if the government does not strictly control imports.

Nguyen Hai, VSSA’s secretary general, said that Vietnam can adjust the tariff when necessary because ATIGA comprises provisions adjusting the tariff if the policies on opening the market have serious influences on the domestic sugar industry.

Some analysts pointed out that there is no need to protect sugar companies with high import tariffs, because sugar manufacturers have been ‘living well’ thanks to the sale of sugar at high prices.

Hai admitted that Vietnam’s sugar products are less competitive than imports from some countries, but affirmed that the industry is better than many other countries in the world.

“There are some sugar refineries in Vietnam equipped with the most modern technologies in the world,” he said, adding that only 30 percent of refineries have small production scale.

He also denied that sugar firms have been ‘living well’, saying that the listed sugar companies with good business performance can make fat profits not from their core business field, but from financial investments and other business fields.

Quang Ngai Sugar JSC, for example, once reported total revenue of trillions of dong, but the income was not from sugar production, but from soybean milk.

To date, Vietnam has cut 8,603 tariff lines within the framework of ATIGA.