More foreign languages to be taught at schools 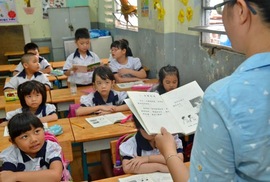 Under the program to teach Japanese at the national educational system in 2016-2026, Japanese will be taught at 300 primary schools and 10,000 students will be the beneficiaries of the program.

Since September 15, four primary schools in Hanoi and one school in HCMC began teaching Japanese to third graders.

These include the state-owned Nguyen Du, Khuong Thuong, Chu Van An and the privately-run Gateway International in Hanoi, and the Vietnam-Australia International School in HCMC.

At the schools, students learn Japanese as the first foreign language with four periods (one period lasts 45 minutes) a week.

According to Bui Thi Dieu Ngoc, headmaster of Nguyen Du Primary School in Hanoi, Japanese teaching is applied on a trial basis to second and third graders.

“It’s still too early say about the result, but I believe students would feel elated with the foreign language. All the teachers are very enthusiastic,” Ngoc said.

Nguyen Thi Thanh Ha, headmaster of Khuong Thuong Primary School in Hanoi, said she had a meeting with second and third graders’ parents before running the program. After raising questions and listening to the answers, 100 percent of them agreed to let their children learn Japanese.

When asked about the quality of teachers and the syllabus, Ha said the teachers are selected by the national program on teaching foreign languages by 2020.

The ministry is building up the curricula for teaching Russian and Chinese. It is expected students will learn these languages from the third to 12th grades.

Meanwhile, Korean, French and German would be taught on a trial basis as second foreign languages. In the 2016-2017 academic year, Korean will be taught to sixth and 10th graders at some schools in Hanoi and HCMC. In 2017-2025, the language would be taught at other grades of secondary and high schools.

After the pilot period, the schools which have conditions and demand will continue the teaching of Korean as a second foreign language.

According to the HCMC Education and Training Department, in the 2015-2016 academic year, with support from the Germany Embassy and ZFA, the teaching of German as foreign language (5 periods a week) was applied to 42 sixth graders of Le Quy Don Secondary School.