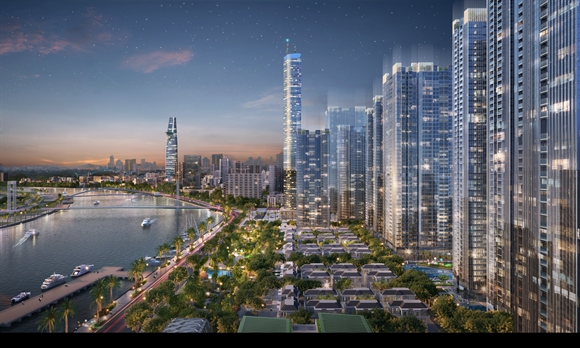 A report of the HCMC Real Estate Association (HoREA) sent to the HCMC authorities showed that 700 foreigners have bought high-end apartments.

The management board of an apartment building which delivered units to buyers in the first quarter of 2016 said that foreigners have been living in at least 20 apartments of the building.

Kevin, a biology specialist from the Netherlands, said he not only has an apartment on the seventh floor, but also has bought another on the 16th floor for leasing at $2,300 a month.

The man said the prices of the two apartments have increased since he bought them. However, he will not sell the apartments, because he plans to live for a long time in Vietnam and earn money with the apartment for lease.

Most of the 700 apartments sold to foreigners recently in HCMC are in the central areas of the city with good living space. Foreigners not only buy houses to reside in, but also to do business.

Many institutional and individual investors bought houses to lease, mostly the high-end apartments in the ‘golden land areas’ of the city.

A survey conducted by the HCMC Construction Department showed that since 2015, the apartment price has increased by 5-15 percent compared with 2014 thanks to higher demand. It is expected that 2016 would witness a ‘growth rate which must not be lower than 2015’.

According to Savills Vietnam, a real estate service provider, the apartment-for-lease market was bustling in the first quarter of the year with 4,400 apartments from 82 projects in supply.

The average leasing capacity has been stable at 83 percent. The business saw considerable improvement with the average rental up by 4 percent compared with the quarter before, and the capacity up by one percentage point.

Savills Vietnam’s CEO Neil MacGregor noted that buyers were paying attention to the view from apartments, which explains why the apartments with beautiful views always have higher selling prices than others.

Buyers are willing to pay high prices if they can get apartments which can satisfy them.

Also according to HoREA, $5.5 billion worth of kieu hoi (money sent by overseas Vietnamese to their relatives in Vietnam) was remitted to HCMC in 2015 and $1.15 billion in the first quarter of 2016. It is estimated that 21.6 percent of kieu hoi flows to the real estate sector.

HCMC attracted $1.3 billion worth of foreign direct investment (FDI) into the sector.