VietNamNet Bridge - A 3-star hotel with 50-70 rooms needs investment capital of VND100 billion. Meanwhile, annual revenue is not higher than VND20 billion. But more and more hotels arise every day.

VietNamNet Bridge - A 3-star hotel with 50-70 rooms needs investment capital of VND100 billion. Meanwhile, annual revenue is not higher than VND20 billion. But more and more hotels arise every day. 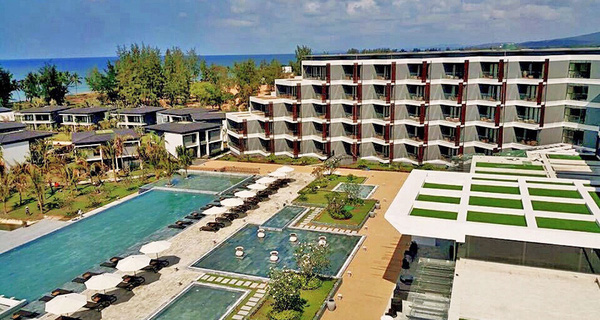 While the northern part of Phu Quoc Island is relatively quiet, the southern part is very noisy. On a road opened some years ago which connects Duong Dong town’s center and Ganh Dau Cape, there are dusty construction sites on which hotels and resorts are built.

Not only on Phu Quoc, resort real estate projects have been developed continuously in the last two to three years in Da Nang, Nha Trang, Hai Phong and Thanh Hoa as well. These are cities and provinces believed to have great potential for tourism development.

“A 3-star hotel with 50-70 rooms needs the investment capital of VND100  billion. Meanwhile, the revenue is no higher than 20 billion a year. But more and more hotels still arise everyday,” commented Trinh Bang Co, a businessman with 30 years’ experience.

Not only privately run hotels, but condotels, priced at between several billion and tens of billions of dong have mushroomed. Buyers pay for condotels and lease condotels to developers with the promised interest rate of 10-12 percent.

The market has become busy with a series of huge projects such as Queen Pearl in Phan Thiet City, Solie Anh Duong in Da Nang, Coco Riverside in Da Nang, Sentosa City in Da Nang and Grand World In Phu Quoc.

The northern market isvless noisy, but also attracts many huge investors such as VIngroup, Sungroup and FLC which have poured trillions of dong into the projects there.

Experts cited three reasons that make tourism and resort real estate develop strongly in recent years. First, the infrastructure items have been built and upgraded which can serve as the foundation for tourism development.

Third, some developers set selling prices at VND2-3 billion, which fit the pockets of middle-class investors.

According to Savills Vietnam, 80 percent of people who buy villas and apartments in Da Nang are from Hanoi. The same thing is seen in Phu Quoc. Analysts believe that Hanoians flock to the south because the real estate price in Hanoi is higher than other localities.

Why do investors spend big money to buy resorts and villas and then leave them idle?

According to Co, investors accept to take loss for the first several years, but they hope they can sell the real estate later and make double profit, when the land price increases.