Most Vietnamese think they belong to ‘middle class’ 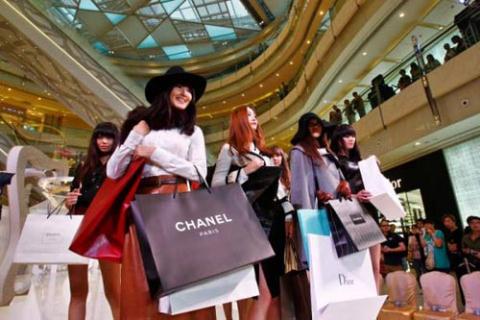 A survey by Hakuhodo Institute of Life and Living ASEAN (HILL ASEAN) found that the middle class has been expanding rapidly in five ASEAN countries, including Singapore, Malaysia, Thailand, Indonesia and Vietnam.

However, considering people’s awareness, 96 percent of Vietnamese think their incomes are high enough to be among the ‘middle class’.

The gap between the real and perceived status is relatively high compared with the 45 vs 85 percent gap in Singapore, 46 vs 79 percent in Malaysia, 56 vs 72 percent in Indonesia.

The figures shown by HILL ASEAN coincide with the conclusions made by most Vietnamese researchers about Vietnamese spending.

A report released recently by the Vietnam Economics Institute showed that the level of prosperity of Vietnam is far below the world’s, but its needs and spending are surprisingly high.

The conclusion has been made after comparing the GDP/industry worker and GDP/agriculture worker.

Tran Dinh Thien, head of the Vietnam Economics Institute, commented that while Vietnam is among the top exporters of rice, coffee, textile & garment and seafood products, the low productivity is a dark part in the picture of Vietnam economy.

Though productivity in agriculture has been increasing steadily in the last 20 years, It still lags behind other countries if comparing the ratio of added value/worker in Vietnam with other countries.

The institute, when comparing the nation’s general economic strength, found that Vietnam’s economic scale is getting smaller in comparison with China. When Vietnam began its doi moi (renovation), Vietnam’s GDP was equal to 1/25, or 4.1 percent of China. The figure decreased to 1.9 percent in 2013.

Under the most optimistic scenario for 2015-2020, Vietnam would have GDP per capita growth rate at 6 percent at first and then 8 percent for the remaining time. Even if this is true, Vietnam’s level of wealth by 2035 would still be far below that of Taiwan and South Korea, just equal to 1/2 of Japan and 1/3 of Singapore in 2011.

Meanwhile, Vietnamese spending is relatively high. Straits Times cited a report as showing that the car sales in Vietnam increased by 37.6 percent in 2014, much higher than the Philippines (29 percent) and Indonesia (6.6 percent).